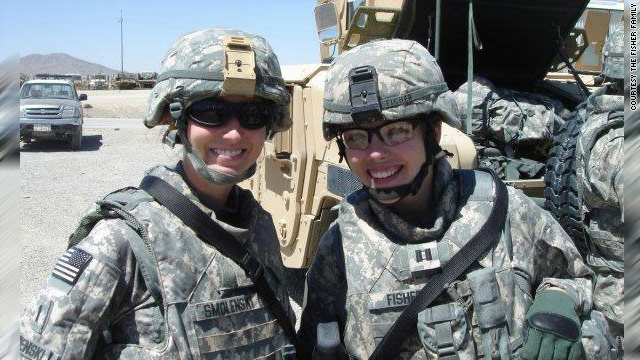 Lt. Candace Fisher, on right, says what matters in the military is not your gender, it is whether a service member can meet the standard
January 24th, 2013
03:27 PM ET

Women in combat: One soldier's story

By Jake Tapper and Jessica Metzger

EDITOR'S NOTE: Jake Tapper is an anchor and Chief Washington Correspondent for CNN.  He’s also the author of the best-selling book about Afghanistan “The Outpost: An Untold Story of American Valor”

In her senior year at West Point, Candace Fisher decided she wanted to join the Military Police since it would allow her the most options “to do the most soldier-like things,” Fisher recalled in an interview with CNN.

In 2006 and 2007, Fisher served at what would become Combat Outpost Keating, one of the most dangerous bases in Afghanistan. Fisher – who then went by her maiden name, Mathis – led a platoon of Military Police, supervising 36 troops, including six other women, attached to the 3rd Brigade Combat Team, 71st Cavalry.

With Defense Secretary Leon Panetta announcing today that the Pentagon would end its policy of excluding women from combat positions, Fisher – reached at Fort Leonard Wood in the Missouri Ozarks, where she is currently a small group leader for an officer leadership course – said the Army was acknowledging what has already in many ways become a reality in the military.

“It’s a formalization of what we’ve been experimenting with the last ten to twelve years in Iraq and Afghanistan,” Fisher told CNN. “I think that those two conflicts have probably given the Army a pretty good idea of whether or not an actual policy change was warranted.” END_OF_DOCUMENT_TOKEN_TO_BE_REPLACED