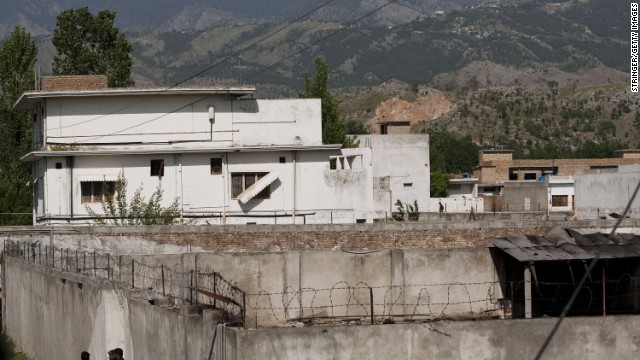 Thirty-three pages detailed how the mission would be announced to the world if it was a success. But the other 33 pages spelled out what would have happened, and what would been said, if it all went wrong. The plan was carried to the White House in a locked bag by George Little, then-press secretary to CIA director Leon Panetta. Little spoke to CNN Wednesday, just two days before leaving government service as the Pentagon press secretary.
END_OF_DOCUMENT_TOKEN_TO_BE_REPLACED

The plot was eventually delayed after one of the participants withdrew from the plot.
END_OF_DOCUMENT_TOKEN_TO_BE_REPLACED

Its broad brim obscured his features from the view of pesky eyes or satellite cameras that might blow his cover while he was hiding out in Pakistan, according to a report published widely in Pakistani media.

The 337-page leaked report details the domestic life of one of the world's most wanted men as a grandfather in his final days of life.

It also scathes Pakistani authorities for failing to keep him out of the country, and for failing to prevent the U.S. raid by Navy SEALs that killed bin Laden in May 2011.

END_OF_DOCUMENT_TOKEN_TO_BE_REPLACED

Osama bin Laden's son-in-law, who has served as an al Qaeda spokesman, was captured and has been brought to the United States, two administration officials and a federal law enforcement official said Thursday.

Sulaiman Abu Ghaith is being held in New York, and will appear in court Friday to face federal charges, the law enforcement official said.

A sealed indictment lays out charges against him, the administration officials said.

Abu Ghaith was captured within the past week in Jordan, according to a spokesman for U.S. Rep. Peter King of New York.
Congress was notified when Ghaith was taken into U.S. custody, the administration officials said.

The U.S. Treasury Department has described Abu Ghaith as "the official spokesman of al Qaeda since his appointment to that position after the attacks of September 11, 2001."

He appeared in videos as "the mouthpiece of bin Laden," the department said.

Bin Laden, leader of the terrorist al Qaeda network that staged the 9/11attacks on the United States, was killed in a U.S. Navy SEAL raid in Pakistan in 2011.

"Concerning recent writing and reporting on 'The Shooter' and his alleged situation, this former SEAL made a deliberate and informed decision to leave the Navy several years short of retirement status," said Rear Admiral Sean Pybus, commander of the Naval Special Warfare Command.
END_OF_DOCUMENT_TOKEN_TO_BE_REPLACED

"They spent, in the case of the shooter, 16 years doing exactly what they're trained to do, which is going out on these missions, deployment after deployment, killing people on a regular basis, " said Bronstein, executive chairman of the Center for Investigative Reporting. "They finally get to the point where they don't want to do that anymore."
END_OF_DOCUMENT_TOKEN_TO_BE_REPLACED