Republican members of Congress plan a host of questions for Secretary of State Hillary Clinton during her long-awaited testimony on Wednesday about the deadly attack on the U.S. diplomatic compound in Benghazi, Libya.

Questions are expected to range from a security vacuum in Northern Africa to new cables suggesting that Ambassador Christopher Stevens, who was killed in the September 11 assault, once proposed moving the compound to a more secure location adjacent the CIA Annex, sources tell CNN.

Congressional staffers have been shown new State Department e-mails and cables indicating that in November 2011, Stevens, concerned about the safety of the compound in Benghazi, proposed two options to the State Department, sources tell CNN.  The first involved moving the compound back into a hotel. The second would move the compound to an unoccupied villa adjacent the CIA annex.  CIA officials agreed with U.S. diplomatic personnel on the ground that the latter option would be safer. But the State Department rejected the idea.

The presence on the House Foreign Relations Committee of several new members and on the Senate Foreign Relations Committee of at least two possible GOP presidential hopefuls – Marco Rubio of Florida and Rand Paul of Kentucky – has some State Department officials anticipating aggressive questions about whether the presence of Islamic extremists in Mali and Algeria were in any way related to past decisions by the Obama administration to keep U.S. combat troops out of Libya.

Most questions are expected to re-visit well-worn lines of inquiry about why requests by officials on the ground in Libya for additional security were not heeded, and faulty talking points about whether an anti-Islam video played a role in the attack that also killed three other Americans.

Other questions could involve the State Department response to the terrorist bombing of the U.S. compound in Benghazi that had occurred the previous June.

Lawmakers may also be interested in Clinton's precise whereabouts on the night of the September attack, her personal involvement in administration actions that night as well as efforts to locate Stevens, who went missing before he died.

END_OF_DOCUMENT_TOKEN_TO_BE_REPLACED

Secretary of State Hillary Clinton will meet with Pakistan's foreign minister and the army chief of staff Monday on the sidelines of a NATO summit to review where U.S.-Pakistani relations stand, a senior State Department official said.

Clinton's scheduled meeting in Brussels with Foreign Minister Hina Rabbani Khar and Gen. Ashfaq Parvez Kayani is latest in a series of talks this year aimed at repairing the bilateral relationship that was badly strained in 2011 following a raid by U.S. commandos on Osama bin Laden's hideout in Abbottabad, Pakistan.

"Obviously, if you sort of step back a little bit, for us, 2011 was as hard a year in U.S.-Pakistan relations as you can imagine," the official said.

"And so we tried in 2012 to sort of get back into some sensible business with them. Our philosophy has been that it ought to be possible between Pakistan and the United States to systematically identify our shared interests and act on them jointly."

This year, the United States has tried to improve relations between the two countries by focusing on counterterrorism cooperation, Afghanistan's future and improving market access and trade - not aid - with a bilateral investment treaty, said the official, who spoke on condition of anonymity as a matter of practice.

END_OF_DOCUMENT_TOKEN_TO_BE_REPLACED

Secretary of State Hillary Clinton on Monday tried to douse a political firestorm around the deadly assault on a U.S. diplomatic mission in Libya, saying she is responsible for the security of American diplomatic outposts.

"I take responsibility" for the protection of U.S. diplomats, Clinton said during a visit to Peru. But she said an investigation now under way will ultimately determine what happened in the attack that left four Americans dead.

The attack on the night of September 11 killed Chris Stevens, the U.S. ambassador to Libya, and three other Americans at the American consulate in Benghazi.

The Obama administration has been heavily criticized after Vice President Joe Biden said during last week's vice presidential debate that the White House did not know of requests to enhance security at Benghazi, contradicting testimony by State Department employees that requests had been made and rejected. After the debate, the White House said the vice president did not know of the requests because they were handled, as is the practice, by the State Department.
END_OF_DOCUMENT_TOKEN_TO_BE_REPLACED

By Deirdre Walsh and Gregory Wallace

The State Department's rejection of "repeated requests for increased security in Benghazi" came amid "a clear pattern of security threats" in the five months leading up to the attack on a U.S. diplomatic post in Libya, a Thursday letter from House Republicans obtained by CNN reads.

"The attack that claimed the Ambassador's life was the latest in a long line of attacks on Western diplomats and officials in Libya in the months leading up to September 11, 2012," the letter from Reps. Darrell Issa and Jason Chaffetz to Secretary of State Hillary Clinton reads.

The Republicans demanded answers to several questions and testimony at a hearing next Wednesday – the only hearing on any matter scheduled so far in the 35 days remaining until Election Day.
END_OF_DOCUMENT_TOKEN_TO_BE_REPLACED 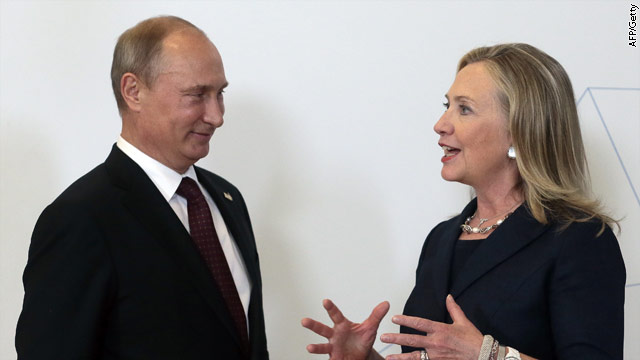 “When the decision was made that we would hold the chairmanship several years ago we thought that it would give a general boost to the whole region of Far East Russia,” says Mikhail Kalugin, Acting Head of Economic Section at the Russian Embassy in Washington.
END_OF_DOCUMENT_TOKEN_TO_BE_REPLACED

Clinton: Russia, China on board with the U.S.

Russia and China back the U.S. pressure on Iran, Secretary of State Hillary Clinton told CNN's Jessica Yellin in an exclusive interview.

"With respect to these very stringent sanctions, Russia and China have been cooperating," Clinton said.

By Jill Dougherty, reporting from onboard Secretary Clinton's plane

U.S. Secretary of State Hillary Clinton may attend an international meeting on Syria proposed by Joint Special Envoy Kofi Annan, but only if the participants agree that there must be a political transition in the country, an official said Tuesday.

Russia has opposed the idea that other countries dictate a political transition, insisting it is a decision for the Syrians themselves.

Clinton called Annan from her plane en route to a three-nation tour of Finland, Latvia and Russia. The special envoy is continuing his consultations, a senior State Department official told reporters aboard the plane.

END_OF_DOCUMENT_TOKEN_TO_BE_REPLACED

At a Washington think tank on Tuesday, Clinton said, "We are concerned about the latest information we have that there are attack helicopters on the way from Russia to Syria, which will escalate the conflict quite dramatically."

Clinton said the United States has repeatedly asked Russia to stop arms shipments to President Bashar al-Assad's regime, but Russia has said anything it is sending is not being used against the public unrest. "That's patently untrue," Clinton said before making the accusation about the helicopter shipments.

END_OF_DOCUMENT_TOKEN_TO_BE_REPLACED

The proposal is similar to one the Washington Post reports Annan will propose this week to the United Nations Security Council, which could include bringing Iran to the table. END_OF_DOCUMENT_TOKEN_TO_BE_REPLACED