The beard that delayed the Fort Hood court martial trial for months is gone. Maj. Nidal Hasan, the former Army psychiatrist convicted of 13 murders and dozens of attempted murders, is clean shaven again.

According to an Army statement about Hasan's incarceration at the U.S. Disciplinary Barracks at Fort Leavenworth, Kansas, "All inmates must conform to AR 670-1, wear and appearance of Army Uniforms and Insignia."

The statement also said, "In keeping with the provisions" of the regulations, "Inmate Hasan has been shaved."
END_OF_DOCUMENT_TOKEN_TO_BE_REPLACED

Selection of the jury panel for Maj. Nidal Hasan's court-martial was supposed to start last week, but the process has been stalled over issues surrounding his plan to act as his own attorney.

Hasan faces a possible death sentence in connection to the November 2009 shooting rampage at Fort Hood in Texas that killed 13 people and injured dozens of others.

"It is very frustrating," said shooting survivor Mick Engnehl of the delay. He was an Army specialist preparing for his first deployment to Afghanistan when he was shot twice during the massacre. His injuries left him unable to remain in the Army or get a civilian job.
END_OF_DOCUMENT_TOKEN_TO_BE_REPLACED 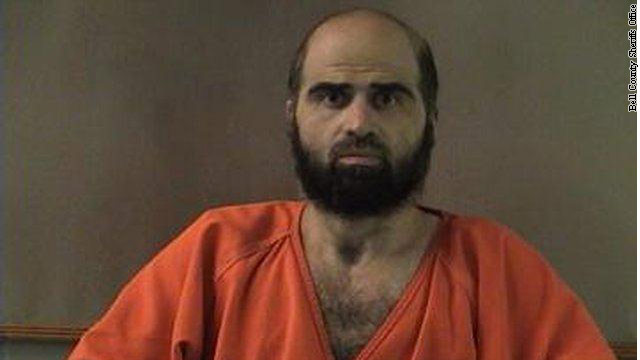 END_OF_DOCUMENT_TOKEN_TO_BE_REPLACED

Maj. Nidal Hasan, the Army psychiatrist charged with killing 13 people at Fort Hood in 2009, has told the judge in his case that he wants to represent himself at his upcoming trial, the Army base said in a media release Wednesday.

Because of the request, Col. Tara Osborn, the judge in the case, has postponed the start of the trial, which had been scheduled for May 30, to June 5.

END_OF_DOCUMENT_TOKEN_TO_BE_REPLACED

The Army has decided not to award Purple Hearts to the dead and wounded in that incident. The victims of the mass shooting at Fort Hood, Texas

That has families, and some lawmakers outraged.

CNN Pentagon Correspondent Chris Lawrence looked in to this.

Hasan, an Army psychiatrist, has been charged with 13 counts of murder in connection with the November 2009 shooting spree at Fort Hood, the sprawling Army post in central Texas.
END_OF_DOCUMENT_TOKEN_TO_BE_REPLACED

The U.S. government has asked a military appeals court to deny accused Fort Hood shooter Maj. Nidal Hasan's request to keep a beard he has grown and to reject his bid to have the judge overseeing his court martial removed from the case.

Army regulations prevent most soldiers from wearing facial hair while in uniform. Hasan, a practicing Muslim, maintains he has the right to wear the beard under federal law protecting religious rights.

Involuntarily shaving a person is "not a novel concept" and is within the court's rights, the Appellate Government Counsel of the Judge Advocate General's office wrote in a brief for the U.S. Court of Appeals for the Armed Forces.

Hasan did not prove that wearing his beard was "based on a sincerely held religious belief," the filing said.

The brief also raised the concern that Hasan's decision to grow a beard was to make it difficult for witnesses to identify him, calling the timing "questionable."
END_OF_DOCUMENT_TOKEN_TO_BE_REPLACED 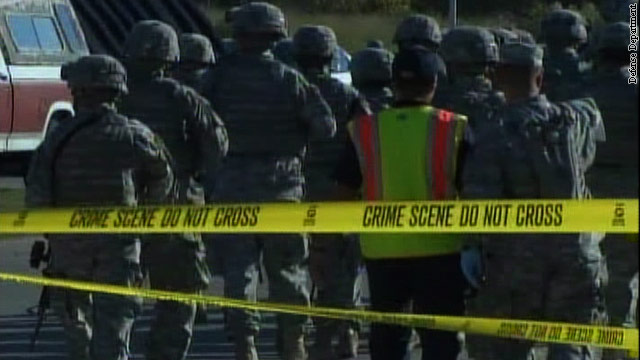 One victim, who was shot in the chest, says, "They (Fort Hood victims) were killed and wounded by a domestic enemy, somebody who was there that day to kill soldiers, to prevent them from deploying," according to Army Staff Sgt. Shawn Manning in the video. "If that's not an act of war or an act of terrorism, I don't know what is."
END_OF_DOCUMENT_TOKEN_TO_BE_REPLACED