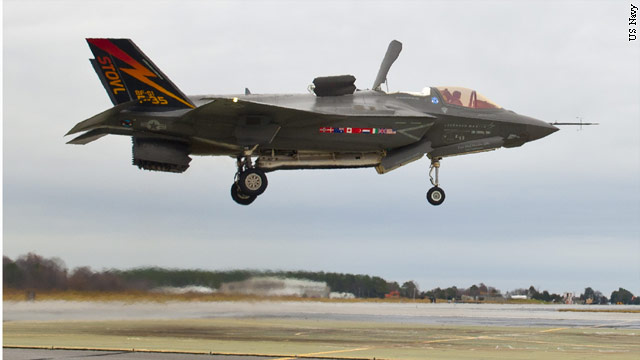 A jet fighter with stealth characteristics was test flown this week in China. (Photo from cjdby.net)
November 2nd, 2012
08:28 PM ET

WASHINGTON (CNN) - CNN has obtained detailed photographs of a new stealth fighter being tested in China.

It is the second such stealth fighter China has tested in as many years and appears destined to become the communist nation's future aircraft carrier-based fighter jet, according to weapons analysts.

The plane, dubbed by outsiders as the J-31, was test flown Tuesday in Shenyang. According to the analysts, the two photographs obtained by CNN appear to have been leaked by officials in China.

"It has to be an official photographer because nobody else can get that close to the airplane," said John Pike, director of GlobalSecurity.org. "These are all publicity photos from the factory, and I could not imagine that the factory would publicize these things without somebody higher up in the food chain authorizing it."

Richard Fisher, a senior fellow in Asian military affairs at the International Assessment and Strategy Center (IASC), agrees these are not pictures sent out surreptitiously by some Chinese aviation aficionado. "The Internet censors are controlling this process, have no doubt that."

But Fisher said the reason for the release may not be as threatening as some might imagine.

"It's being done in a way to help promote pro-military nationalism in China. There's just a huge, large audience in China for this kind of information. It's kind of like NASCAR."