An NSA memorandum describes the beginnings of the agency's collection of so-called telephone metadata of nearly every American under a provision of the Patriot Act, and the agency's monitoring of foreign Internet traffic.

The agency says in the memo that its systems monitor 1.6% of the world's Internet traffic, and its analysts review .00004% of global traffic.

Published accounts drawn from leaked documents provided by admitted NSA leaker Edward Snowden have portrayed a much broader eavesdropping system under section 702 of the Patriot Act.

Another document from the Justice Department describes the legal basis for collecting the telephone metadata, such as the numbers dialed, the length and time of the calls. The government says the NSA phone data collection operated under court supervision, and that the database is only accessed for specific searches in counterterrorism investigations. 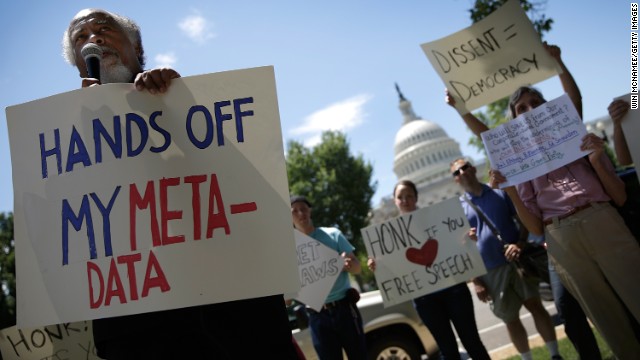 By Dan Merica and Elise Labott

Was Edward Snowden a hero or a traitor?

That is the question the media, the public and elected officials have debated ever since Snowden released classified information about the United States' efforts to monitor its own citizens.

But on Thursday, the debate got more interesting when representatives from the National Security Agency - the organization Snowden leaked information about - the Pentagon and the American Civil Liberties Union informally debated the issue in public.

END_OF_DOCUMENT_TOKEN_TO_BE_REPLACED

In wake of NSA leaks, former key lawmaker says no tradeoff needed between security and liberty

EDITOR'S NOTE: This is the latest in a series of stories and opinion pieces previewing the upcoming Aspen Security Forum. Security Clearance is a media sponsor of the event which is taking place from July 17-20 in Aspen, Colorado.  Follow the event on Twitter under @aspeninstitute and @natlsecuritycnn #AspenSecurity.

Revelations of classified National Security Agency programs by former contractor Edward Snowden have prompted debate about the public and political oversight of U.S. intelligence and the role of a special court that reviews electronic surveillance requests.

CNN’s Foreign Affairs Reporter Elise Labott talks to Jane Harman, a former Ranking Member of the House Intelligence Committee, about fallout from the Snowden leaks and questions they raise about the role of intelligence collection.

Harman, now head of the Woodrow Wilson Center for International Scholars, will participate in a panel about counterterrorism, national security and the rule of law at the Aspen Security Forum this week.

END_OF_DOCUMENT_TOKEN_TO_BE_REPLACED

By Dana Bash and Tom Cohen

Bomb plots targeting the New York Stock Exchange and the city's subway were among more than 50 worldwide thwarted by top-secret surveillance programs since the 2011 al Qaeda attacks on the United States, authorities said on Tuesday.

Gen. Keith Alexander, National Security Agency director, FBI and other officials revealed startling details at a House Intelligence Committee hearing aimed at finding out more about the telephone and e-mail surveillance initiatives that came to light this month through leaks of classified information to newspapers.

It was the most comprehensive and specific defense of those methods that have come under ferocious criticism from civil liberties groups, some members of Congress and others concerned about the reach of government into the private lives of citizens in the interest of national security.

The man who admitted leaking classified documents about U.S. surveillance programs purportedly went online live on Monday to declare the truth would come out even if he is jailed or killed, and said President Barack Obama did not fulfill his promises and expanded several "abusive" national security initiatives.

According to the Guardian newspaper, Edward Snowden answered questions in an online chat about why he revealed details of the National Security Agency's secret surveillance of U.S. citizens.

Snowden said he did so because Obama campaigned for the presidency on a platform of ending abuses. But instead, he said Obama "closed the door on investigating systemic violations of law, deepened and expanded several abusive programs, and refused to spend the political capital to end the kind of human rights violations like we see in Guantanamo, where men still sit without charge."

Snowden also wrote that he had to get out of the United States before the leaks were published by the Guardian and Washington Post to avoid being targeted by the government.

At social event, DNI Clapper acknowledges "the elephant in the room"

It would probably be an understatement to say this was one of Director of National Intelligence James Clapper’s worst weeks on the job.

Leaked details of two top secret surveillance programs had the intelligence community and the Obama Administration scrambling to respond to what appears to be a massive effort to collect phone records of Americans and the e-mails and other communications of foreigners by the National Security Agency.

At a dinner Friday night honoring former CIA Director Michael Hayden, the DNI acknowledged his tough few days with a quip: “So many emails to read, so little time.”

But Clapper had serious comments about what he called “the elephant in the room.”