U.S. Ambassador to Afghanistan Ryan Crocker talks to CNN's Christiane Amanpour  about the attacks that followed President Obama’s surprise visit to Afghanistan and whether he believes the bombing was a message to the U.S. President.

Crocker calls the attacks "tragic" but he does not believe the attacks were related to the President's visit and Crocker says Kabul is "a pretty normal, pretty secure city."

The full interview airs at 3pET on CNN International.

As the Senate Foreign Relations Committee began its hearing into the nomination of Ryan Crocker to be the next U.S. ambassador in Kabul, at least one vote in favor seemed assured.

Senator John McCain (R-Arizona), the ranking member of the committee, lavished praise on Crocker's performance as ambassador in Baghdad between 2007 and 2009.

"The truth is what Ambassador Crocker accomplished in Iraq was nothing short of a miracle," McCain said. "General Petraeus has obviously received huge praise for the role he  played in Iraq and he deserves every bit of it.  But as General Petraeus would be the first to affirm, our military strategy in Iraq would never have worked without Ryan Crocker's constant dogged and tireless leadership of our political strategy."  END_OF_DOCUMENT_TOKEN_TO_BE_REPLACED

New US envoy to Afghanistan is old hand 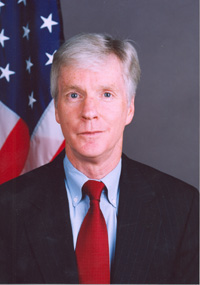 Ryan Crocker’s confirmation hearing to become the next US Ambassador to Afghanistan is just a formality. Any conversation of who would take the post started from the premise that he was the only logical candidate for the job. But nobody who knows Ryan Crocker would have imagined he would ever return to diplomatic life.

By all accounts Crocker was exhausted and in poor health when he finished up his tour in Iraq – and he landed a well-deserved comfortable post as dean of the Bush School of Government and Public Service at Texas A&M. The last time I saw him after his return from Baghdad, he said he could not have been happier to be back on American soil.

He had certainly earned his chance at the "good life." When he retired from the Foreign Service in 2009 Crocker was one ofWashington's most seasoned diplomats, having served ambassador to Iraq,Pakistan,Kuwait, Lebanon and Syria. He was first assigned to the American Embassy inBeirutduring the Israeli invasion of Lebanon in 1982 and the bombings of the embassy and the Marine barracks in 1983.  One of the Foreign Service's most experienced Middle East hands and a fluent Arabic speaker; he also held diplomatic posts in Qatar,Iran and Egypt.