"And many more have been, unfortunately, confined to die under a barrage of barrel bombs, scud missiles, artillery and other conventional weapons," he said.
END_OF_DOCUMENT_TOKEN_TO_BE_REPLACED

North Korean leader Kim Jong Un’s execution of his uncle was “an ominous sign” of instability and danger, U.S. Secretary of State John Kerry said in an interview broadcast Sunday.

Kerry also weighed in on reports about former FBI agent Robert Levinson, who went missing in Iran seven years ago. The United States has not stopped efforts to get him released, Kerry told ABC's "This Week."

The secretary of state is on an overseas trip that's taken him to Jerusalem, Ramallah, Vietnam, and will carry him through Manila and Tacloban later this week.

END_OF_DOCUMENT_TOKEN_TO_BE_REPLACED 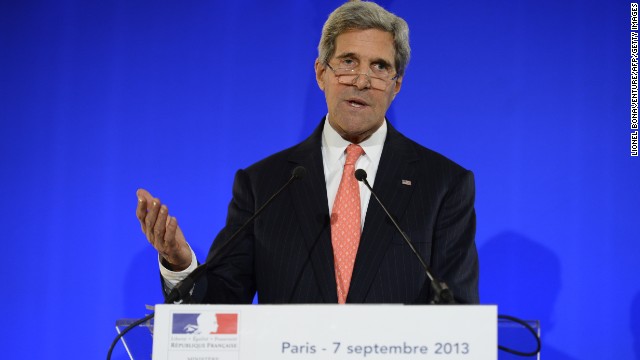 While Russia could be helpful in tracing possible motivation of the alleged attackers, brothers Dzhokhar and Tamerlan Tsarnaev, as well as any possible connection to terrorist groups, the Obama administration wants to make sure it does not upset an already fragile relationship.
END_OF_DOCUMENT_TOKEN_TO_BE_REPLACED 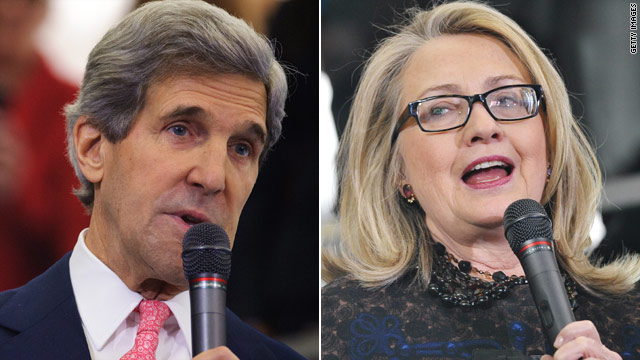 That rift was unexpectedly revealed Thursday in testimony on Capitol Hill. Sen. John McCain, R-Arizona, asked Panetta and Dempsey: "Did you support the recommendation by Secretary of State - then-Secretary of State Clinton and then-head of CIA General Petraeus that we provide weapons to the resistance in Syria? Do you support that?
END_OF_DOCUMENT_TOKEN_TO_BE_REPLACED

Kerry gets started at State, speaks to Middle East leaders

Secretary of State John Kerry spoke with leaders from Israel and the Palestinian Authority, among others, during his first weekend on the job, according to a readout released by the State Department on Sunday.

The former senator from Massachusetts spoke to Israeli Prime Minister Benjamin Netanyahu about the country's recent elections and the Middle East peace process. He also talked to Palestinian Authority President Mahmoud Abbas about Israeli-Palestinian relations and vowed to continue efforts with Congress to send funds to the authority.

The conversations came one day after Kerry spoke with Israeli President Shimon Peres, whom he has known since he was a freshman senator, State Department spokeswoman Victoria Nuland said in a readout on Saturday. 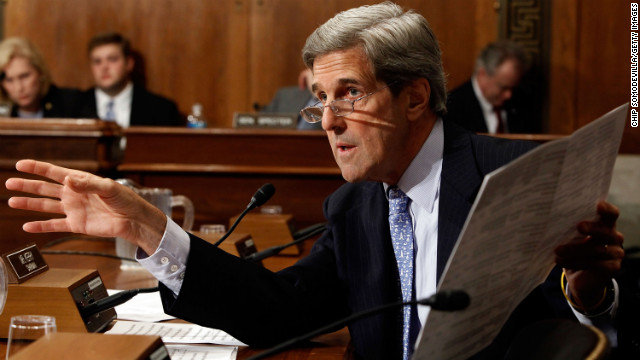 Sen. John Kerry, the president's nominee for secretary of state, put America's anxiety over Iran front and center during his confirmation hearing, saying the "questions surrounding Iran's nuclear program" must be resolved.

"The president has made it definitive," Kerry told the Senate Foreign Relations Committee Thursday during what is expected to be an easy confirmation process.

"We will do what we must do to prevent Iran from obtaining a nuclear weapon, and I repeat here today, our policy is not containment. It is prevention, and the clock is ticking on our efforts to secure responsible compliance."

By Jessica Yellin and Holly Yan

Nine years after his presidential bid ended in defeat, John Kerry's political career might take a major turn Thursday during his hearing to become the next secretary of state.

The longtime senator from Massachusetts could sail to an easy confirmation, as politicians from both parties expressed optimism he would win approval.

"Over these many years, John's earned the respect and confidence of leaders around the world. He is not going to need a lot of on-the-job-training," President Barack Obama said when he nominated Kerry last month.

"I think it is fair to say that few individuals know as many presidents and prime ministers or grasp our foreign policies as firmly as John Kerry, and this makes him a perfect choice to guide American diplomacy in the years ahead."

Kerry is noted for having the experience, gravitas and relationship-building skills that could help him succeed Hillary Clinton, the outgoing top U.S. diplomat.