New issue of al Qaeda magazine may have been hacked

A purported new issue of an English-language al Qaeda magazine linked to the Boston terrorist attacks was posted on an al Qaeda web forum earlier this week, but its content beyond its cover page was scrambled, suggesting the possibility the forum was hacked by Western intelligence agencies.

The magazine, produced by al Qaeda's Yemeni affiliate - al Qaeda in the Arabian Peninsula, which regularly includes how-to instructions for followers to carry out terrorist attacks in the West - has received significant scrutiny in recent weeks.

According to analysts, the explosive devices the Boston bombers built had striking similarities to a bomb recipe in the first issue of the magazine - "How to build a bomb in your Mom's kitchen" - that has been downloaded by militants in multiple Islamist terrorist plots on both sides of the Atlantic.
END_OF_DOCUMENT_TOKEN_TO_BE_REPLACED 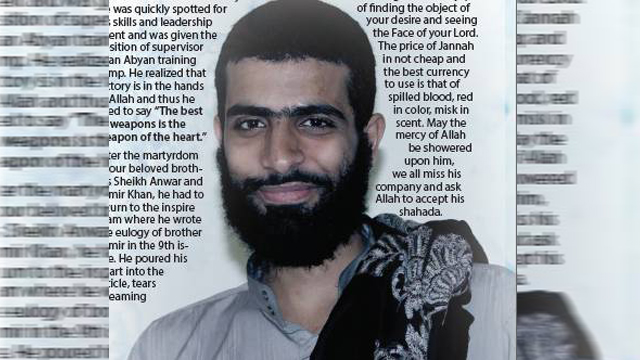 It said that several years ago, Abu Yazeed had traveled to the UK to earn a degree in a subject he was "passionate" about - science - but he quickly grew disillusioned with the "hypocrisy of the West" and abandoned his studies to go back to Yemen to join up with jihadists. END_OF_DOCUMENT_TOKEN_TO_BE_REPLACED

By Paul Cruickshank and Adam Levine

Al Qaeda's affiliate in Yemen has released a new guide for would-be Western recruits urging those Western militants who were thinking of traveling to join the group in Yemen to, in effect, think twice before making the trip.

The guide, entitled "Expectations Full," was apparently compiled by Samir Khan, the American-Saudi editor of the group's Inspire magazine, before his death in a drone strike in late September 2011.

"I strongly recommend all the brothers and sisters coming from the West to consider attacking America in its own backyard. The effect is much greater, it always embarrasses the enemy, and these type of individual decision-making attacks are nearly impossible for them to contain," Khan wrote in a caption underneath a picture of the Golden Gate Bridge and the San Francisco skyline.