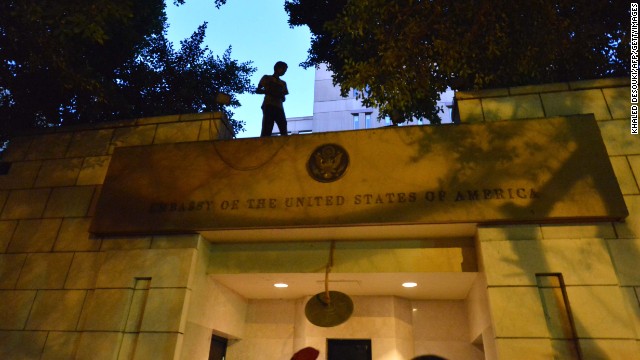 Egyptian media reports cited anonymous Egyptian officials saying Alaiba was transferred to the custody of Egypt's domestic spy service after it was discovered he was a liaison between the United States and the Muslim Brotherhood, and took part in riots against the military's ouster of President Mohammed Morsy.

Harf said Alaiba was involved in connecting American diplomats to various political actors in Egypt, but said the Egyptians have not said whether Alaiba was connected to those contacts. She said Washington has asked for more information.

"What we said to the government of Egypt is that they need to tell us, and more importantly, make public ... not through anonymous sources, but make public very clearly why he was arrested and is being held," Harf said.

As a local employee, Alaiba does not get diplomatic immunity. But his arrest, made on the third anniversary of the Arab Spring uprising in Egypt, is prompting fears of pressure on diplomats and journalists who continue to have contact with the Islamist opposition, which the government has outlawed as a terrorist group.

Since declaring the Brotherhood a terrorist organization in December, the government has cracked down on journalists who have communications with the group, filing charges against 20 journalists for conspiring with the Brotherhood to spread false reports about civil strife in Egypt.

The State Department has criticized what it called a concerted campaign to intimidate the media.

Award-winning British journalist Sue Turton was one of the eight Al-Jazeera journalists accused of aiding and abetting terrorist groups. She and her fellow colleagues have embarked on a campaign to free three al- Jazeera journalists detained since late December.

"The authorities really want to silence anyone who is not towing the government line," Turton told CNN.

Alaiba's arrest will likely complicate already strained ties between the United States and Egypt, which have worsened since Morsy's ouster.

The United States has temporarily withheld about third of its $1.3 billion in annual military aid to Egypt, after the military backed government killed hundreds of pro-Morsy supporters demonstrating against his ouster.

Many Egyptians have viewed the move as tacit U.S. support for keeping the Muslim Brotherhood in power.

Harf said the United States did not consider the Muslim Brotherhood a terrorist organization and believed it should be included in the Egyptian political process.

"We will continue talking to the Muslim Brotherhood in Egypt as part of our broad outreach to the different parties and groups there," Harf said.

Egyptian Defense Minister Abdel Fatah al-Sissi is in Russia on an official visit aimed at strengthening security ties with Moscow. Sissi is widely expected to run for President this spring.

Harf played down reports of a deal in which Russia would provide Egypt with about $2 billion in weapons.