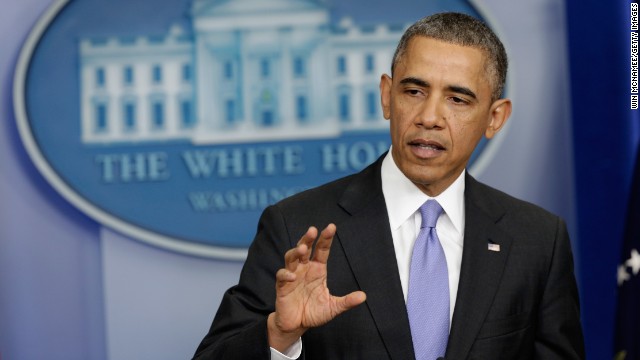 Obama said he would like to see if a "short-term, phase-one deal" with Iran can be put in place in the near term that requires Tehran to freeze aspects of its nuclear program while the international community negotiates a more comprehensive long-term deal.

The President's remarks come amid a growing call in Congress that tighter sanctions are the only way to get Iran to ultimately acquiesce and agree to a deal that would stop what the United States believes is its march toward a nuclear weapon.

"If it turns out six months from now that they're not serious, we can crank - we can dial those sanctions right back up," Obama said, noting that the economic penalties have hurt Iran's economy.

Obama reiterated his administration's policy that Iran should not be allowed to acquire a nuclear weapon, and that he was leaving "all options on the table."

The United States, along with the five permanent members of the United Nations Security Council and Germany came close to a deal during talks with Iran in Geneva last week.

The talks ended with both sides blaming each other for the lack of an agreement.

Vice President Joe Biden, Secretary of State John Kerry, and other members of the administration have been briefing members of Congress this week on the status of the talks, while asking Congress to hold off on additional sanctions while the current round of discussions continue.

Kerry and officials from the State and Treasury departments briefed members of the Senate Banking Committee as the panel considers moving additional sanctions legislation.

Many Republican members of the committee came away from the meeting still pushing for more sanctions.

"I think today is the day in which I witnessed a future of nuclear war in the Middle East in the future (that) someday will be part of our children's heritage," Senator Mark Kirk (R-Illinois) told reporters, while accusing the administration of appeasing Iran like Britain did Nazi Germany in the 1930's.

In an interview with MSNBC on Thursday, Kerry said 95% of the "core sanctions regime" with Iran would remain in effect under the current administration plan, while allowing for the movement of a "tiny portion" of Iranian assets frozen in international banks to flow as discussions continue.

State Department spokeswomen Jen Psaki said Thursday additional sanctions could embolden hardliners in Tehran to balk at the diplomatic effort and "could end the negotiations."

Discord over the administration approach toward Iran went beyond those briefed on Capitol Hill.

Sen. John McCain said he is "very disappointed" with the administration – and especially Kerry – on the issue of nuclear negotiations with Iran.

Kerry is "a good friend of mine," McCain said. But when it comes to Iran, "this guy has been a human wrecking ball."

Obama's comments came the same day the International Atomic Energy Agency, the U.N. nuclear watchdog, released a report saying Iran had halted the expansion of a majority of its uranium enrichment capacity.

Under Secretary of State Wendy Sherman is scheduled to lead the American delegation at the next round of talks next week in Geneva.