The U.S. Embassy in Kampala, Uganda, issued an alert this week to Americans that it is looking into reports that an attack similar to the one at a Kenyan mall could soon occur in the the city.

The embassy's statement said there were no specific details about a possible date or location of a "Westgate-style attack." It didn't say where the reports were coming from.

A U.S. official with direct knowledge of the latest information told CNN the notice was sent "out of an abundance of caution." The U.S. is still vetting the information, the official said, to see if there is any truth behind it.

At least 67 people were killed by multiple attackers during the four-day siege at the mall in Nairobi last month. The terrorists who attacked the mall claimed to be members of Somalia-based Al-Shabaab.

The embassy in Kampala - Uganda's capital - urged Americans traveling to the country or living there to register with the State Department's Smart Traveller Enrollment Program.

-CNN's Barbara Starr and Elise Labott contributed to this report.

END_OF_DOCUMENT_TOKEN_TO_BE_REPLACED

The nomination is expected on Friday. He must be confirmed by the Senate. 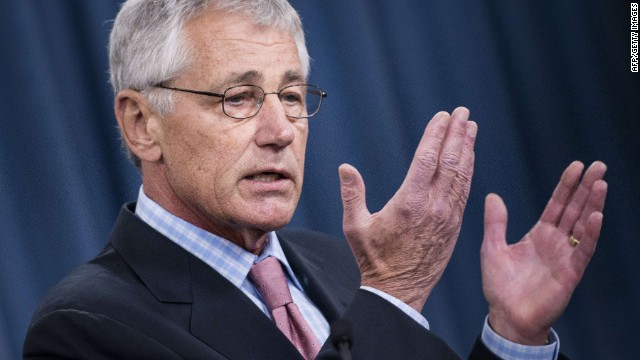 Hagel said the civilian defense workforce was hit hardest during the 16-day shutdown that ended on Thursday.
END_OF_DOCUMENT_TOKEN_TO_BE_REPLACED

By Laura Smith-Spark and Jim Sciutto

A day after talks in Geneva between Iran and six world powers over Tehran's nuclear ambitions ended on a promising note, Iran's state-run news agency quoted government officials as expressing optimism that differences can be resolved.

Deputy Foreign Minister Abbas Araqchi said the so-called P5+1 - the United States, Russia, China, France and Britain, all countries with permanent seats on the U.N. Security Council, plus Germany - "has accepted the overall framework of Tehran's new proposal to settle differences but said we should wait for their practical measures," IRNA reported Thursday.

"Araqchi further referred to uranium enrichment as Iran's red line in the negotiations, adding that Iran could still negotiate over the level and the volume of enrichment," it added.

According to Araqchi, who is taking a lead role in the negotiations, the sides could reach an agreement in as little as three to six months.

But while this capture was picture-perfect, al Ruqai was only one of many terrorists currently on the loose.
END_OF_DOCUMENT_TOKEN_TO_BE_REPLACED