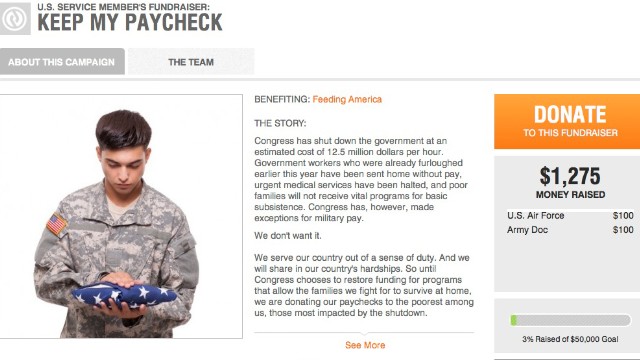 What he’s done is say to the politicians of all stripes: “I don’t want it.”

The young airman has begun a website for military members to donate their paychecks to help others during the government shutdown.

“I am very frustrated with the government shutdown, and its impact on the very people we are fighting for, and more specifically, our most vulnerable Americans. I was equally as frustrated to see Congress choose to fund my paycheck while my brothers and sisters go without. I don't want it,” he said

The site http://www.keepmypaycheck.org/ allows anyone, military, and civilians to donate money, or their pay as part of a message to Congress that the military doesn’t want special treatment, he said.

Congress approved pay for active duty troops even with the shutdown, but some 400,000 Defense Department civilians have been sent home with no pay.

The donations will go to Feeding America, one of the largest charities in the nation for helping feed those in need—some 25 million Americans a year.

“Service members fight to protect and promote a more perfect union; this isn't it. And until Congress restores funding, we will step in and donate our paychecks along with our lives to protect the country we love,” he said.

On the website which went active Thursday night he adds, “We serve our country out of a sense of duty. And we will share in our country's hardships. So until Congress chooses to restore funding for programs that allow the families we fight for to survive at home, we are donating our paychecks to the poorest among us, those most impacted by the shutdown.”

Congress approved legislation earlier this week to ensure that troops would be paid during the shutdown.