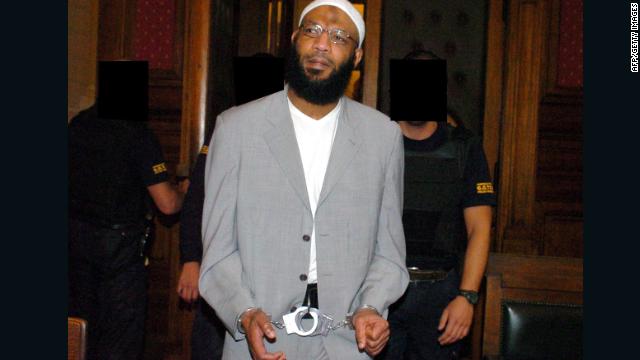 Trabelsi was indicted in 2006 by a grand jury in Washington. The indictment was unsealed Thursday.

According to the indictment, Trabelsi lived in Germany in 2000 and traveled the next year to Afghanistan, where in the spring he personally met with Osama bin Laden to volunteer for a suicide bomb attack. Federal prosecutors allege that at bin Laden's direction, he spoke with Muhammed Atef, a high-ranking member and chief military planner of al Qaeda, and met with others with whom he was to form a cell to carry out the attack.

According to the indictment, Trabelsi and others learned how to make the explosives and later traveled to Pakistan to get money for use in the plot.

In July 2001, he rented an apartment in Brussels and bought chemicals to try to make a 1,000-kilogram bomb, according to the indictment. He and others also scouted the Kleine-Brogel military base where NATO forces, including the U.S. Air Force, are based.

Trabelsi admitted to plotting to attack the base in the Belgian case.

Belgian security officials have long been worried about the Trabelsi case. A senior Belgian counterterrorism source told CNN that Trabelsi had become even more radicalized in jail. The source also said there was concern about having to conduct extensive surveillance of Trabelsi once he was released. In late 2007 Belgian security services broke up a suspected plot by extremists in Belgium to break Trabelsi free of prison.