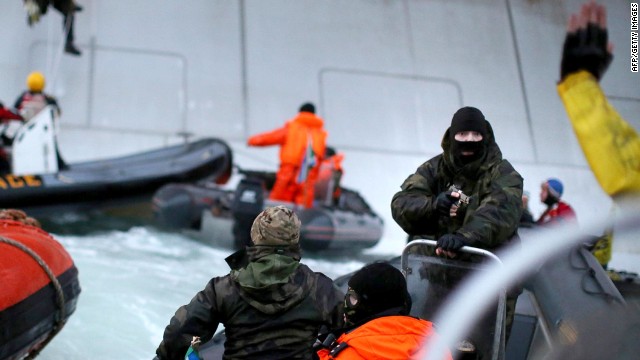 One other American, according to the State Department, has not been charged. Greenpeace said his name is Peter Willcox, the captain of the Greenpeace boat.

The organization says he also was the captain of the Rainbow Warrior when it was bombed by the French Government in Auckland, New Zealand in 1985.

The State Department says the U.S. Consulate in St. Petersburg has met with both of the detained U.S. citizens and it understands they have access to legal counsel.

Twenty eight activists from 18 countries, along with an independent journalist and a videographer, were aboard the Greenpeace ship, the Arctic Sunrise.

Armed Russian Coast Guard officers descended onto the deck of the boat from helicopters and detained the protesters at gunpoint.

Their boat was towed to the northern Russian port of Murmansk September 24 and the protesters are being held in three different facilities.

The charge of piracy is "over the top," Phil Radford, executive director of Greenpeace USA, tells CNN.

"I think they (Russian prosecutors) will take it all the way to trial. I think Gazprom is using its political muscle to have the courts really crack down on these peaceful protesters. It's a serious and overblown charge. They need to have the piracy charge because it's the only way they can save face from illegally arresting these activists and journalists."

Russian authorities and Gazprom, however, say the activists endangered the lives of the company's employees and their action could have led to an environmental disaster.

Russian President Vladimir Putin has indicated he does not consider the protesters pirates but Prime Minister Dmitry Medvedev, quoted in the Russian media, said Wednesday: "Environmental concerns cannot be used as a cloak for illegal acts no matter what lofty considerations such acts are based on. They cannot manifest themselves in illegal methods or methods that are eventually unsafe for people and technological facilities."

Greenpeace says it expects charges to be brought against other Greenpeace campaigners. Radford said that, as of Wednesday, nine men and five women protesters had been charged.