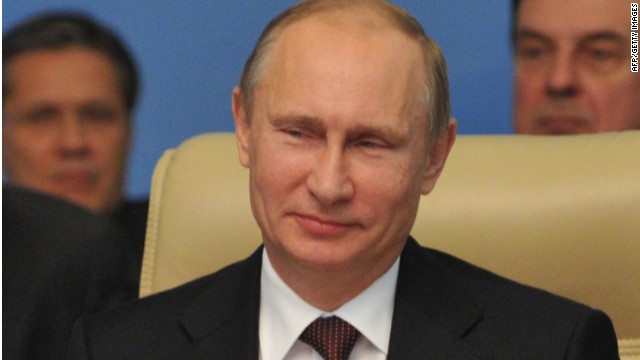 Moscow moved with lightning speed to seize the idea raised unexpectedly by Secretary of State John Kerry that Syria should give up its chemical weapons, and seasoned Kremlin watchers believe that deft maneuver could mark a turning point in Moscow’s broader diplomatic strategy in the Middle East – and beyond.

“It’s the first time in 20 years, since Russia became a new state, that they’ve taken an initiative like that,” says Georgetown University’s Angela Stent, author of a new book “The Limits of Partnership: U.S.-Russian Relations in the Twenty-First Century.”

“It’s part of a broader Russian goal to re-assert itself as a major player,” she told me at the Valdai Discussion Club, a yearly gathering of leading Russian and international experts.

“I think they really were worried about the impact of the potential U.S. military strike on Syria - what it would do to Syria and the instability it could cause.”

Russian President Vladimir Putin, says Stent, also was worried about how it might affect Russia itself and the population in the North Caucasus where Moscow has faced an insurgency, especially in Chechnya - “and they saw an opportunity.”

Since Putin came to power, one of Russia’s major goals has been to have a seat at the table on all important international issues, and Russia’s veto power at the United Nations was the vehicle for that.

Now, Stent says, Russia is “beginning to set an agenda,” after two decades of the United States setting the agenda. “This is the beginning of something where, if there is a strategy behind it, it could lead to a … more influential role globally.”

What does Russia really want?

Up to now, Russia’s international strategy was driven more by what it did not want, than what it did want, says Toby Gati, former Special Assistant to President Bill Clinton and Assistant Secretary of State for Intelligence and Research. “The only word that every American knows in the Russian language is ‘nyet.’ And that means no.”

Russia’s traditional diplomatic role, she says, “is to be wary of what happens in the international system because they can’t control it.”

“They are used to watching the United States, watching us stumble, or not know what’s going to be the next step, and sitting on the sidelines, saying either ‘We told you so,’ which Putin is very good at doing, or ‘We would have done it differently,” or ‘You Americans have to be constrained because you’re the crazy uncle in the attic.’”

Putin’s proposal to rid Syria of chemical weapons puts Russia back on stage, with the Russian president in the new role of initiator. “It’s a very unusual position for Russia and, I think, one they are very happy having,” Gati says.

“But also a very difficult position for them because it means, for the first time, they actually have to prioritize their interests. Is it getting rid of the chemical weapons? Is it having cooperative relations with the U.S.? Is it keeping Assad in power? Is it, perhaps, having to put boots on the ground? Is it actually come to the point that the Security Council will have to vote, perhaps, on Chapter 7 enforcement?”

Chapter 7 of the U.N. charter leaves open the possibility for the Security Council to consider use of force against Syria.

Russia’s aims in Syria have been consistent and “quite straightforward” for some time, says James Sherr of the Royal Institute of International Affairs (Chatham House) and author of “Hard Diplomacy and Soft Coercion: Russia’s Influence Abroad.”

“Russia wants to protect and defend its ally – a very important ally in a very critical state, one of only two now in the Middle East – which affords Russia an enormous amount of influence - in Lebanon, in Israel, in the wider region, in Iran - that it might not otherwise have,” says Sherr.

Russia is committed, not just in Syria, but globally, Sherr says, “to diminishing the influence of Western values in the world as a whole and, of course, at home.” Moscow may not approve of Syrian President Bashar al-Assad’s “bestiality,” but it does believe that authoritarian states “have much the same rights of sovereignty under international law as those states we consider democratic.”

Russia sees the chemical weapons framework agreement as a means of beginning to pursue its wider ambitions about “changing the architecture in the region,” Sherr says. “And that is why they are now publicly putting on the table the issue of Israel’s nuclear stockpile.”

Sherr, Stent and Gati all point to Putin’s comments at the Valdai Discussion Club, in which he said that Syria built up its chemical weapons in order to counter Israel’s undeclared nuclear weapons. Two other Russian officials at the conference made similar comments.

“He made it clear that Israel … now has to agree, sign a nonproliferation treaty, and give up its nuclear weapons, and this is going to be a condition for any further progress in this area,” says Stent. “That, of course, is a nonstarter as far as the United States is concerned. But that’s where Russia has put its mark.”

Sherr does not believe Russia’s fundamental aim is to weaken Israel but rather “to promote (Moscow’s) own position; everything else is secondary to that.” Nor does he believe Russia can put Israel’s nuclear weapons on the bargaining table. It can, however, “put Israel in a more defensive position, which in turn makes Israel more reliant on Russia and makes it as important for the Israelis to conduct their diplomacy in Moscow as in Washington,” Sherr says.

And if Israel’s nuclear weapons are now part of the discussion about Syria, so is Iran. “They’re in a strong position to say that we cannot proceed constructively without Iran being at the table,” Sherr says. “And if you want a wider solution to the Iranian nuclear issue, then you also need our support and you also then need to bring Israel into that equation.”

“Russia wants everyone to understand that there can be no peace, or even substantial improvement of conditions in the Middle East, if Russia is not at the top table in a critical condition,” Sherr says. “Russia is letting everyone know: ‘We are the country in the key role. We are the only country here who can talk to all the parties that matter.’”

“Iran is the big prize,” Gati agrees. “That’s what we keep forgetting.”

Putin’s recent offers to build a second nuclear reactor at Iran’s Bushehr nuclear plant, as well as supply Iran with S-300 air defense missile systems, are part of Putin’s overall strategy in the region, Gati says. “I think that was a way of saying to the Iranians: ‘Don’t rush to open up to the Americans. We can provide things now and you don’t have to change internally. You don’t have to meet any demands. If you start negotiations with the Americans what’s going to happen is, ‘What are you doing at home? What are your policies toward Israel?’”

Stent heard something new – and concerning – from Russia’s foreign minister, who also spoke at the Valdai conference. “We also heard from Mr. [Sergey] Lavrov that maybe we won’t get all the chemical weapons from Syria, we may get some of them.”

“I’m sure that the U.S. condition on this is that we have to get all of them,” Stent says. “If you only get some of them, then you really haven’t achieved your objective. So there are many ways this can come unstuck.”

All three experts concur: the agreement on Syria’s chemical weapons has set loose an avalanche of diplomatic moves that could have profound implications for Russia and the West.

“This step arose suddenly, says Sherr. “It is, in fact, an improvisation, but it stems from something the Russians are very good at, which is studying the other side, in this case us, very carefully, studying the logic of our positions, studying our mistakes, and seizing an opening when it suddenly appears. And that’s what they have done.”

Russia pounced on a diplomatic opportunity, Gati says, but it could turn out to be a challenge for Moscow, precisely because Russia is not used to making the first move. “And it will be hard for America,” she says, “because we are usually the ones putting out the ideas, leading the parade, and finally, usually getting the solutions. In this case, that hasn’t happened. Inaction hasn’t worked. The American policy hasn’t worked. And now we’re going to see if the Russian one does.”

Syria, she says, could be a unique instance where the Russians take the lead, or it might be a harbinger of things to come. “One thing that will be very interesting to watch,” she says, “ is whether or not it leads to the development of some ideas for some type of new type of relationship with the United States, what I would call ‘Reset a la Russe.’”

It’s too early to predict whether the Russian proposal will help bring the war in Syria to an end. But several Russia experts at the Valdai conference criticize Russia for not using its influence at the outset of the conflict to help stop it.

“Before the opposition was militarized, before the influx of foreign fighters, before the dominance of jihadists, before 100,000 people were killed, before there were half a million refugees,” says Sherr, “the country that had the most convincing combination of nonmilitary means of pressure to apply against Assad to produce meaningful changes and compromises, was Russia. And those means were not used.”

“So Russia does have a considerable responsibility for how this conflict has evolved. Whether they recognize that responsibility or not, anyone on the outside assessing the conflict today or in the future will have to come to that conclusion. They are at least as responsible for everything which has gone awry here as the United States and some other significant actors.”