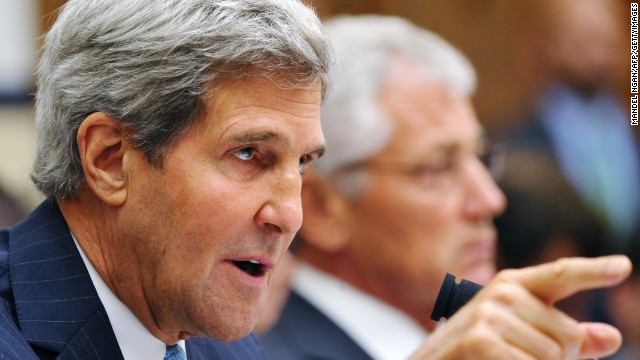 All eyes turn to Geneva talks on Syria

Secretary of State John Kerry heads to Geneva on Thursday for a high-stakes meeting with his Russian counterpart that could conceivably tip the balance on whether the United States strikes Syria militarily over alleged chemical weapons use.

Kerry will meet with Russian Foreign Minister Sergey Lavrov to discuss the specifics of Moscow's plan that would put Syria's chemical stockpiles under international control, described as a difficult but momentous step that would nullify the threat of weapons of mass destruction and diffuse the crisis.

In his address to the nation on Tuesday, President Barack Obama said he was willing to test the seriousness and feasibility of the proposal before resuming his push for a vote in Congress on whether to authorize force to punish the Syrian regime over an alleged poison gas attack last month the United States says killed more than 1,400 people.

Kerry will take the lead in dealing with the Russians, Obama said.

Throughout much of the 1990s, U.N. weapons inspectors criss-crossed Iraq in search of Saddam Hussein's stocks of chemical weapons. It was a game of cat and mouse, as inspectors tried to reconcile what the Iraqi regime was telling them with conflicting intelligence from western governments.

In total, the inspectors of the U.N. Special Commission supervised the destruction of more than 40,000 chemical munitions, some 500,000 liters of chemical agents, 1.8 million liters of chemical precursors and delivery systems including ballistic missile warheads.
END_OF_DOCUMENT_TOKEN_TO_BE_REPLACED