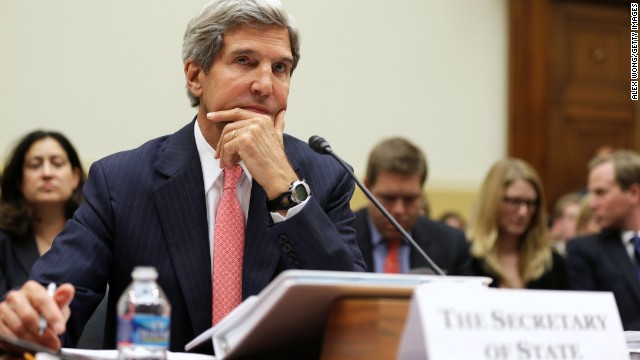 But with the United States inching closer to possible military action against Syria over alleged chemical weapons use, Kerry has a much more urgent diplomatic mission - to implore skeptical allies to join an international coalition to punish the regime of Bashar al-Assad.
END_OF_DOCUMENT_TOKEN_TO_BE_REPLACED

The Russian ambassador to the United States said any use of American military force against war-wracked Syria could carry serious consequences and hoped such an outcome would not ruin already tense relations.

While things are difficult between Washington and Moscow, Sergey Kislyak said in Washington that ties have not plunged to Cold War depths – yet.

“They’re not in good shape,” Kislyak said at an appearance in Washington for the Center for the National Interest.
END_OF_DOCUMENT_TOKEN_TO_BE_REPLACED

As Syria point man, Kerry out on limb but loving it

Last Thursday night, John Kerry got a call from the White House. He had already spoken out Monday about what he said was “undeniable” evidence Syrian President Bashar al-Assad gassed his people. Now he was being asked to make a speech Friday afternoon laying out the case the United States had against the Assad regime and the importance of taking action to prevent him from doing it again.

In forceful and emotional remarks, drafted overnight by his staff and President Obama’s White House aides, Kerry laid out the U.S. intelligence against Assad and made the case for urgent U.S. action.

“The primary question is really no longer: What do we know,” Kerry said. “The question is: What are we – we collectively – what are we in the world going to do about it?”

His strong and, by most accounts, convincing indictment of Assad sounded so much like a case for imminent U.S. military action against Syria that the world was surprised when Obama hit the pause button the following day. In an address to the nation from the White House Rose Garden, the president explained his decision to seek congressional authorization for military strikes against Syria.