The beard that delayed the Fort Hood court martial trial for months is gone. Maj. Nidal Hasan, the former Army psychiatrist convicted of 13 murders and dozens of attempted murders, is clean shaven again.

According to an Army statement about Hasan's incarceration at the U.S. Disciplinary Barracks at Fort Leavenworth, Kansas, "All inmates must conform to AR 670-1, wear and appearance of Army Uniforms and Insignia."

The statement also said, "In keeping with the provisions" of the regulations, "Inmate Hasan has been shaved."
END_OF_DOCUMENT_TOKEN_TO_BE_REPLACED

Breaking up is hard to do: the Obama-Putin relationship

Relationships can be tough, especially long-distance ones. And talking to that special someone all night on the "red phone" isn't easy when you're pulling all-nighters dealing with world crises.

President Barack Obama and Russian President Vladimir Putin showed one public display of affection on Thursday, shaking hands and exchanging a few words. Officials say the world leaders could have a longer meeting on the margins of the G-20. The issue of what to do in Syria is adding a lot of stress to an already strained relationship.

Back in January 2009 when Obama was sworn into office for the first time, he had high hopes for U.S.-Russian relations after things went south between George W. Bush and Putin.

There was a new young president – Dmitry Medvedev – in the Kremlin and Obama thought maybe Washington and Moscow could start over.
END_OF_DOCUMENT_TOKEN_TO_BE_REPLACED

An independent panel has found the State Department has not overall paid enough attention to oversees security for diplomatic posts and called for it to be elevated in importance, several sources familiar with the matter said.

Led by former Secret Service Director Mark Sullivan, the panel was created as part of a broad inquiry of last September's deadly terror attack on the U.S. diplomatic compound in Benghazi, Libya.

A separate assessment by the Accountability Review Board, established after the Benghazi attack, criticized the department for failing to provide adequate security and made 29 recommendations.

One was the creation of the latest analysis to identify "best practices" in the public and private sectors in security intelligence, risk management and accountability, all areas where problems were identified at the State Department.

END_OF_DOCUMENT_TOKEN_TO_BE_REPLACED 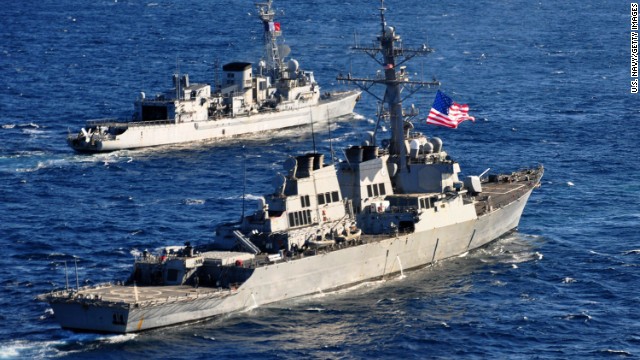 END_OF_DOCUMENT_TOKEN_TO_BE_REPLACED

Britain, France, and Germany say their intelligence backs up the same conclusion.

But Russia has rejected those claims, insisting there's no such proof. Russian President Vladimir Putin said he wants to see evidence that would make the determination "obvious."

Obama: Red line on Syria is the world's, not his

President Barack Obama said Wednesday that the red line he spoke of last year regarding Syria's use of chemical weapons came from international treaties and past congressional action, and he challenged the international community to join him in enforcing bans on such armaments.

In direct and confrontational remarks to reporters in Sweden, Obama laid out his rationale for wanting to attack Syria on the same day a Senate committee in Washington will vote on a proposed resolution authorizing limited U.S. military strikes.

He also insisted he had the authority to order attacks on Syria - expected to be cruise missile strikes on Syrian military command targets - even if Congress rejects his request for authorization.

By Lateef Mungin and Michael Pearson

As lawmakers in the United States and France debated the merits of military intervention in Syria's brutal civil war, Russia's president said Wednesday his country could back a U.N.-approved military strike on Syria if there's proof the regime used chemical weapons.

"If there are data that the chemical weapons have been used, and used specifically by the regular army, this evidence should be submitted to the U.N. Security Council," President Vladimir Putin said in an interview with The Associated Press and Russia's state Channel 1 television.

"It should be a deep and specific probe containing evidence that would be obvious and prove beyond doubt who did it and what means were used," he told the news agency.