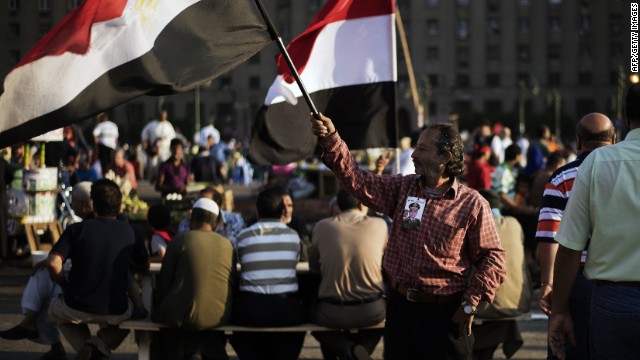 Hours after the military removed him from power, the United States encouraged the military to form a new transitional government without blinking an eye.

In a rare display of candor from the White House podium last week, Press Secretary Jay Carney spoke about vital U.S. interests, which had to be taken into account when the administration made a determination about events as they related to American aid to Egypt.

It’s jarring when an act of U.S. policy takes the shine off the notion that America acts for purely altruistic reasons.

But Steve Cook of the Council on Foreign Relations argues what’s missing from the debate is an articulation of U.S. interests – a step that sometimes must trump democratic ideology.

“It really hasn’t been about promoting fundamental democratic change in Egypt. If it were, we would have taken Morsy to task on a whole host of issues where he was being undemocratic,” Cook said.

“We have talked a lot about democracy promotion. But when push comes to shove, we think about what our strategic interests are and we move to protect them. It’s hard to be unapologetic about that because we are supposed to stand for democracy. But the truth is, we will work with whoever is in power to promote our interests and provide for us what we want,” Cook added.

President George W. Bush was confronted with this dilemma when he undertook a major foreign policy shift with his Freedom Agenda. In essence, the Freedom Agenda said the United States would no longer continue to give a blank check to autocratic Arab regimes that oppressed their people with hope of stemming the tide of Islamic extremism.

Yet even as it was engaged in the project to promote democracy, Bush’s administration was engaged in a war on terrorism that required deals with leaders and security services that were considered undemocratic and repressive.

In President Barack Obama’s 2009 Cairo speech, he distanced himself from the Freedom Agenda.  Addressing the Arab and Muslim World, Obama said that although the United States supported their democratic aspirations, “no system of government can or should be imposed upon one nation by any other.”

The president briefly changed his tune as the Arab uprisings unfolded in 2011, promising the United States would support the democratic change of the Arab Spring.
He endorsed the Tunisian revolution, eventually called for President Hosni Mubarak to step down in Egypt and joined the military campaign to oust Libyan leader Moammar Gadhafi.

With none of the Arab revolutions producing a stable, functioning democracy, the United States has awakened to the idea that democracy must share the stage with other American principles like stability, rule of law and tolerance.

“The reality of it is, U.S. policy has never been specifically been about democracy, whatever we say,” says Shibley Telhami, Anwar Sadat Chair for Peace and Development at the University of Maryland and a fellow at the Brookings Institution.  “And the Arab world never believed that either. We know that from polls.  It isn’t that we don’t want democracy. We do.  But we want other things a lot more. If you are engaged in a war on terrorism, have troops to protect and other strategic interests, that trumps everything else.  The rest is rhetoric.”

The administration has remained almost silent about the Bahraini monarchy’s continued crackdown on its people.

Obama has resisted sending arms to rebels seeking to oust Syria’s Bashar al-Assad, agreeing after they faced defeat from forces loyal to the regime being helped by Iran and Hezbollah.

And in Qatar, the United States congratulated Emir Hamad bin Khalifa al-Thani, as he handed power over to his son, Tamim, not a very democratic move in the post-Arab Spring environment.

“We are struggling with how to deal with this push and pull,” one senior official said. “How do we stay true to our democratic values and protect our interests?  When we find that sweet spot in the middle –  when we find a democratically-elected government in line with our values, it’s perfect. But we can see that there are tremendous challenges.“

Initial indications are that the new government, filled with liberal politicians, academics and technocrats will be friendlier to the United States than the Muslim Brotherhood, a likely reason Washington made no move to prevent or condemn Morsy’s ouster.

And concern is mounting about the stability of the regime of King Abdullah in Jordan, where U.S. national security interests are some of the most pressing.

In addition to its peace treaty with Israel, U.S. cooperation with Jordan on a wide range of issues, from Syria to counter-terrorism to intelligence sharing, is core to America’s national security interest.

Dissent is also rising against the royal family in Saudi Arabia, which has remained a close U.S. ally for decades and kept oil markets stable.

What will Washington do if these restive populations start uprisings, which are likely to be met by their monarchies cracking down?

“We will be in a very, very difficult position at that point,” another senior U.S. official acknowledges. “Maybe we should be having a greater discussion about the point that democracy is the absolute, but we are acting on our own national interests and we should be clear about them. To say we are not doing that is disingenuous. We are not an NGO.”