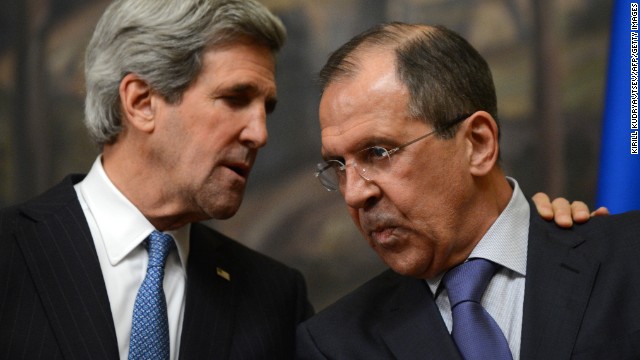 Warning that Syria could fall into the "abyss," Secretary of State John Kerry says he and his Russian counterpart will push for a meeting between the Syrian government and the opposition to try to find a political solution to the crisis that has engulfed the country in civil war.

Speaking at a joint press conference on Tuesday in Moscow, Kerry said he and Russian Foreign Minister Sergey Lavrov had agreed "as soon as is practicable, possibly and hopefully, by the end of this month" to seek to convene an international conference.

The aim would be to implement last summer's Geneva communique brokered by Russia and the United States outlining how a transitional government could be formed.

If the conference takes place, it would be the first to bring together representatives of the warring sides, which have been unable to negotiate a settlement to the two-year conflict that has claimed more than 70,000 lives.

The opposition has adamantly refused any role for Syrian President Bashar al-Assad in any transitional government. But Lavrov, without naming al-Assad, said he was "not interested in the fate of certain persons."

Kerry went further by telling reporters that "it's impossible for me, as an individual, to understand how Syria could be governed in the future by the man who has committed the things we know have taken place."

The U.S. policy is that al-Assad must step down.

Separately, President Barack Obama issued an order on Tuesday formally reaffirming the U.S. stance toward Syria that also called on al-Assad to end the "violent war" and "step aside to allow a political transition."

Both Kerry and Lavrov said the transitional government, according to the Geneva communique, will be formed by mutual consent with the support of the international community and with "full executive authority."

Kerry explained that means "the full authority to run and manage the government including their military and security services. And that doing so, as soon as they can possibly implement it, is the best way to resolve the crisis in Syria."

The announcement came at the end of a long day of meetings in Moscow in which Kerry discussed a range of issues, including Iran's nuclear program, Afghanistan, North Korea, and the proliferation of weapons of mass destruction.

The meetings also came as the FBI and Russia's security service, the FSB, have been cooperating more closely on the investigation of the Boston Marathon bombing that killed three people and injured more than 260 others.

Tamerlan Tsarnaev, an immigrant from the Caucasus region and one of two bombing suspects, was investigated by U.S. authorities 2011 on a tip from Russia that he might be shifting toward Islamic extremism.

He visited Russia for six months last year, a trip that is drawing scrutiny from law enforcement. He died in a shootout with police three days after the bombing. His brother, the second suspect, was arrested.

Kerry, who represented Massachusetts in the Senate before becoming secretary of state, said "Boston reminds us that we all have interest in standing up to extremism" and Syria, he said, has become a "magnet for extremists."

The Boston attack, Lavrov said, "showed that no one can hide anywhere from these threats."

He said Russia and the United States agreed that "our special services will be in close contact on this issue."