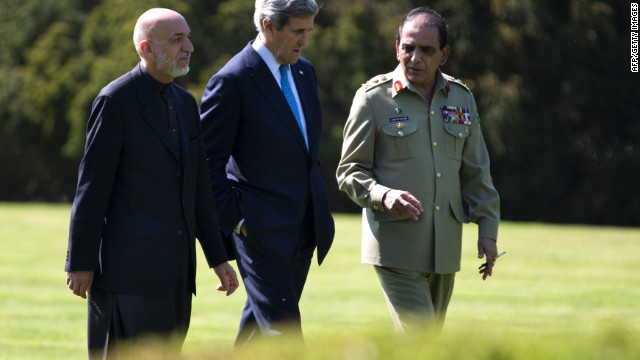 Opening the meeting, Kerry said the talks were important because Afghanistan is currently in a "critical transformational period."

Kerry, who has a good relationship with both Karzai and Pakistani leaders, suggested the meeting in part to help ease tensions between Afghanistan and Pakistan, which have sharply increased over recent border disputes.

With the majority of U.S. troops set to leave Afghanistan next year, the Obama administration hopes to achieve a peace deal between Karzai's government, the Taliban and Pakistan.

But the Taliban has not appeared interested in a deal and competing agendas from neighbors, like Pakistan, have made an agreement elusive.

Addressing U.S. diplomats on Tuesday in Brussels, Kerry said his goal for the talks was to advance the peace process "in the simplest, most cooperative, most cogent way so that we wind up with both Pakistan's and Afghanistan's interests being satisfied but most importantly with a peaceful and stable Afghanistan, which is worth the expenditure and the treasure and effort of these last years."

Pakistan's involvement is seen as crucial to peace efforts because its security services have close ties to the Taliban and other militant groups.

Karzai has said reconciliation cannot succeed without Pakistani buy-in and recently accused it of placing too many conditions on its involvement in peace talks and failing to live up to its previous commitments.

Afghanistan has charged that Pakistan wants to keep Afghanistan unstable after NATO troops end their combat mission by the end of 2014.

The Pakistani Foreign Ministry said in a statement that the country has "consistently endeavored to facilitate an Afghan-led and Afghan-owned peace process."

Karzai met with NATO ministers on Tuesday to discuss transfer of the alliance's decade-long combat mission in Afghanistan before the end of next year to a training and support role.

NATO chief Anders Fogh Rasmussen urged Pakistan to crack down on militants who use Pakistani soil to launch attacks on Afghanistan.

"We need a positive engagement of Pakistan if we are to ensure long-term peace and stability not only in Afghanistan, but in the region," Rasmussen said Tuesday.

"Pakistan and Afghanistan have a mutual interest in fighting extremism and terrorism and cross-border activities."

The United States has said it will likely leave some troops after 2014 for counter-terrorism operations, but President Barack Obama has yet to make a decision on troop levels.

Washington is negotiating a bilateral security agreement with Afghanistan which will dictate terms of an extension for U.S. troops and could provide the basis for any future NATO role.