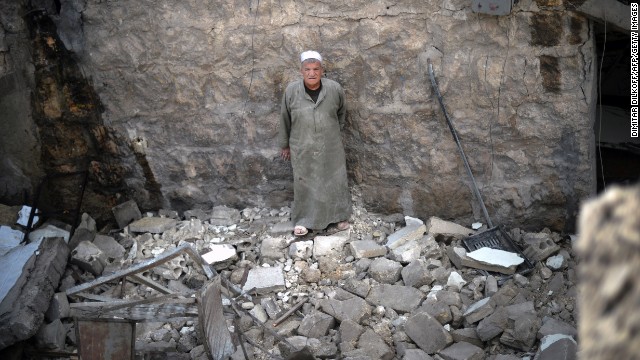 A man stands shocked in the remains of a house following an airstrike by the Syrian airforce in the northern Syrian city of Aleppo on April 15, 2013. The conflict in Syria, which is now in its third year, has cost 70,000 lives, according to the United Nations. (AFP/ DIMITAR DILKOFF)
April 23rd, 2013
12:05 PM ET

Growing U.S. concern about the fate of Syria’s chemical weapons is increasing at the very time an Israeli defense official contends the regime has used them against rebel forces.

A senior U.S. official tells CNN there have been “several” movements of chemical weapons by Syrian forces in the past month.

While the United States believes the stockpiles are still under the control of Bashar al-Assad’s regime, those movements significantly complicate American efforts to keep track of them.

The Pentagon offered a grim assessment last week when asked at a Senate hearing whether the United States could still secure Syrian chemical weapons if the regime fell.

“Not as I sit here today simply because they have been moving it, and the number of sites is quite numerous,” said Joint Chiefs Chairman Gen. Martin Dempsey.

All of this underscores American concern about the U.S. ability to deal with a crisis if those weapons get loose.

This has also contributed to a U.S. decision to increase collaboration and training with Jordan, including the deployment of the 1st Armored Division headquarters to Amman.

The U.S. official told CNN “we have our suspicions that they have” when asked if the regime had used chemical weapons.

That comment came a few days before Tuesday’s statement in Israel by Brig. Gen. Itai Brun, the head of the Israel Defense Forces’ intelligence research and analysis division.

“According to our professional assessment, the regime has used deadly chemical weapons against armed rebels on a number of occasions in the past few months,” Brun told a conference in Tel Aviv.

“For instance, on March 19, 2013, victims suffered from shrunken pupils, foaming from the mouth, and other symptoms which indicate the use of deadly chemical weapons. The type of chemical weapons was likely sarin, as well as neutralizing and non-lethal chemical weapons,” Brun said.

“The almost definitive additional fact is that the regime used, according to our understanding, chemical weapons or is making use of chemical weapons. These two things are a given,” he said.

In Brussels for a NATO meeting, Secretary of State John Kerry told reporters that he spoke with Israeli Prime Minister Benjamin Netanyahu on Tuesday about the comments.

“I think it is fair for me to say he was not a position to confirm that in the conversation that I had,” Kerry said.

“I do not know yet what the facts are. I don’t think anyone knows what they are yet,” Kerry added, saying it was up to Israeli to confirm officially.

He said the information he had at this point does not make him “comfortable” saying whether chemical weapons were in fact used or not.

Pentagon spokesman George Little issued a statement in response to Brun’s comments saying that the United States “continues to assess reports” of the use of chemical weapons in Syria.

“The use of such weapons would be entirely unacceptable. We reiterate in the strongest possible terms the obligations of the Syrian regime to safeguard its chemical weapons stockpiles, and not to use or transfer such weapons to terrorist groups like Hezbollah,” Little said.

President Barack Obama previously has said the use or movement of chemical weapons was a U.S. “red line” that would potentially result in American action against Syria.

But recently, top administration officials have said it would be a “policy” decision if the red line has been crossed, rather than a straight factual finding.