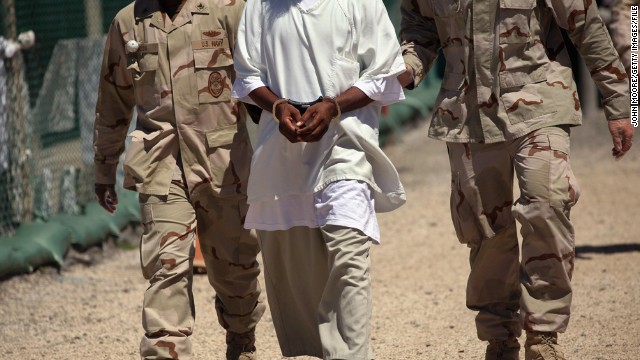 Lt. Col. Todd Breasseale, a spokesman on detainee issues for the Pentagon, said on Monday the number stood at 84, up from just over 30 less than a month ago.

"We've heard over several unclassified phone calls that this is grimmer than it has been in years, so people have been dropping below 100 pounds," Cori Crider, a lawyer who represents several of the detainees, told CNN last week.

"Shaker Aamer and Samir, our two clients, say they've lost at least 30 pounds since they've been striking. Another of my clients, a guy called Nabil, a French resident - he says he was hospitalized. So we are incredibly worried."

But Breasseale said the number of hunger strikers fluctuates because some join for a time, then come off and eat several meals before joining again.

The facility currently houses 166 inmates. Suspected terrorists were sent there after the 9/11 al Qaeda attacks on the United States.

The Pentagon uses a standard similar to that used by the National Bureau of Prisons for defining a hunger strike.

According to Breasseale, anyone who skips nine meals in a row is considered on strike, and some of the detainees will skip nine meals, get counted as a hunger striker, then start eating again.

But others are staying on longer term. At least 16 receive "enteral feeding," a process that administers liquid nutrition through a tube.

Some human rights activists call that force feeding, but Breasseale said most of the detainees fed that way select a flavor of liquid.

There are detainees, however, who have to be restrained before being fed in that manner because the Pentagon says it will not let any of them "commit suicide by starvation."

One of Crider's clients, Samir Naji Hasan Moqbel, is one of them.

"It's an incredibly agonizing process to be force fed like that," Crider said.

Beginning last year through mid-February, between five and six detainees started and stopped hunger strikes. But the number grew after lawyers for some of those held drew attention to conditions at the facility, Breasseale said earlier this year.

David Remes, a Washington-based lawyer who represents more than a dozen Guantanamo detainees, said at the time that his clients told him the strikes were "the last straw" in response to what was described as more intrusive treatment.

For instance, he said his clients were unhappy with an early February search of detainee personal items and an intent to search Korans, something that had stopped in 2006. There were other issues as well, Remes said.