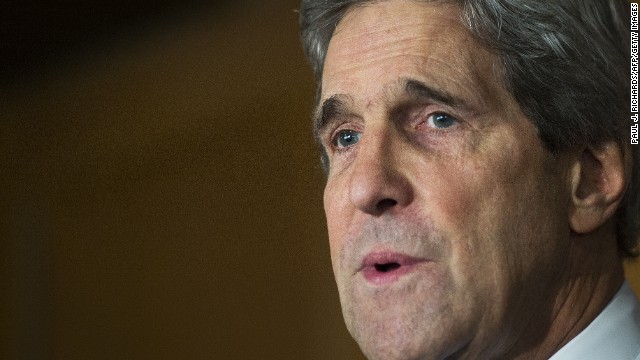 By Ben Brumfield and Michael Martinez

Secretary of State John Kerry took a moment out of his trip to the Middle East Sunday to lament the killing of a Foreign Service member, who was one of six Americans recently killed in Afghanistan.

Kerry met Anne Smedinghoff less than a month ago, he told journalists in Istanbul, Turkey. She was part of his team at the time.

"I remember her as vivacious, smart, capable, often chosen by the ambassador for her capabilities," Kerry said.

Officials warn any resumption of talks with North Korea is premature, and could only come once Pyongyang adheres to its international obligations. But they say Kerry hopes the new emphasis on diplomacy will give the North Koreans a face-saving way to de-escalate the current situation.

"Secretary Kerry agrees that we have to have a robust deterrent because we really don't know what these guys will do," one senior official said. "But he also knows that the North Koreans need a diplomatic off-ramp and that they have to be able to see it."

Kerry left Saturday for the Middle East and then for London before traveling to Seoul, Bejing and Tokyo later next week. END_OF_DOCUMENT_TOKEN_TO_BE_REPLACED