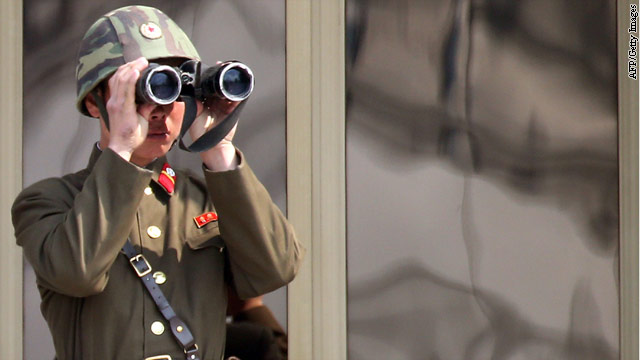 A North Korean soldier looks through binoculars at the truce village of Panmunjom in the demilitarized zone (DMZ) dividing the two Koreas on April 4, 2013
April 4th, 2013
09:04 AM ET

The Obama administration established a "playbook" of pre-scripted actions and responses to the last several weeks of North Korean rhetoric and provocations, an administration official said Thursday.

The plan, the official explained, basically details "if the adversary does this, we do this, we say this."

The scripted actions included an increased show of U.S. military force - such as the flying of B-2 bombers - during the annual U.S.-South Korea military exercise, the Foal Eagle.

"Eyebrows started to go up when it was clear Foal Eagle was going to be protected from the budget cuts of sequestration," the official said, referring to the forced federal spending cuts that went into effect in March.

Details of the playbook were first reported by the Wall Street Journal. The administration official declined to be named because of the sensitivity of the situation.

Some moves not scripted

At the same time, some of the U.S. military's reactions to Pyongyang's saber-rattling were not part of the playbook planning.

Instead, they arose from concerns about what North Korea has planned as the U.S.-South Korean exercise comes to an end, the administration official said.

Those moves include the deployment of ballistic missile defenses closer to North Korea, and a land based missile-intercept system to Guam.

Those actions were ordered in recent days when U.S. intelligence began to gather information that North Korea might be planning additional missile launches.

South Korean Defense Minister Kim Kwan-jin told a parliamentary committee in Seoul Thursday that the North has moved a medium-range missile to its east coast for an imminent test firing or military drill. The missile doesn't appear to be aimed at the U.S. mainland, Kim said, according to the semi-official South Korean news agency Yonhap.

The movement of the missile is "of concern, certainly to the U.S. military and to Japan," said Mark Fitzpatrick, director of the Non-Proliferation and Disarmament Program at the International Institute for Strategic Studies in London.

He said he believed the missile in question was a Musudan, a weapon the North hasn't tested before that is based on a Soviet system with a range of about 2,400 kilometers (1,500 miles), far enough to reach Japan but not Guam.

U.S. officials have publicly stressed that the American military moves - including the sending of B-52 bombers and F-22 fighter jets, in addition to the B-2 bombers - were meant as much to assure the South Koreans that they have Washington's full support and not an excessive response to an unpredictable North.

"What I can tell you is that our response and the mix of assets we have applied to our responses is prudent, logical and measured," Pentagon spokesman George Little said earlier this week.

"We are in the midst right now of - of very important annual exercises that we regularly conduct with the South Koreans, and these exercises are about alliance assurance. They're first and foremost about showing the South Koreans and showing our other allies in the region, including the Japanese, that we are ready to defend them in the wake of threats."

When asked by CNN earlier this week about the "message" the United States was trying to send to North Korea, Little said it was the North Koreans who are being provocative.

"The North Koreans - even before those exercises started - had undertaken provocative steps, and they've conducted underground nuclear tests, they've conducted missile tests outside their international obligations. So they have a track record now over the past few months of provocative behavior," he said.

"We are in the business of ensuring our South Korean allies that we will help defend them in the face of threats," Little said in response. "So I don't think it's a contradiction. I think that North Koreans have engaged in certain actions and have said things that are provocative. We are looking for the temperature to be taken down on the Korean Peninsula."

Hagel hinted at risks in reacting to North Korea, calling the tensions a "complicated, combustible situation" that could "explode into a worse situation."

"It only takes being wrong once. And I don't want to be the secretary of defense who was wrong once. So we will continue to take these threats seriously. I hope the North will ratchet this very dangerous rhetoric down," Hagel said Wednesday.

"But they've got to be a responsible member of the world community. And you don't achieve that responsibility and peace and prosperity by making nuclear threats and taking very provocative actions."