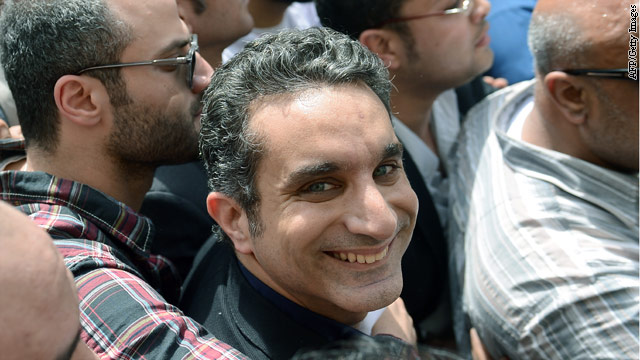 It's the latest salvo in the recent Twitter war between the ruling Muslim Brotherhood and the U.S. Embassy in Cairo. On Tuesday, the Freedom and Justice Party, the political wing of Egypt's Muslim Brotherhood, lashed out at the embassy, tweeting "Another undiplomatic & unwise move by @USEmbassyCairo, taking sides in an ongoing investigation & disregarding Egyptian law & culture."

State Department spokesman Victoria Nuland said the embassy's Twitter feed is back up. The tweet in question, however, was deleted.

"We've had some glitches with the way the Twitter feed has been managed. This is regrettably not the first time. Embassy Cairo is looking at how to manage these glitches," she said. "They came to the conclusion that the decision to tweet it in the first place didn't accord with post management of the site."

It's not the first time Embassy Cairo's Twitter feed has drawn controversy. On September 11, 2012, the embassy put out a series of tweets aimed at calming ongoing protests outside its walls. The tweets, which referenced an anti-Muslim video blamed for the unrest, prompted criticism from then-Republican presidential candidate Mitt Romney, who accused President Barack Obama for being an apologist for American values.

Egypt's latest criticism of the United States has not been limited to Twitter, or even to Embassy Cairo. The FJP also took issue with Nuland's comments at Monday's press briefing, in which she spoke of a "disturbing trend" of growing restrictions on freedom of expression in Egypt, criticized Youssef's arrest and said "there does not seem to be an evenhanded application of justice" because the Egyptian government has been slow to investigate police brutality and violence against anti-Morsy protesters and journalists.

The FJP said they were outraged at Nuland's comments, calling them a "blatant interference" in Egypt's internal affairs.

Secretary of State John Kerry on Tuesday weighed in on Egypt's backward slide from democracy, warning that Egypt was at a "tipping point."

"It is our hope that there is still time to be able to turn the corner. Recent arrests, the violence in the streets, the lack of inclusivity with respect to the opposition - in public ways to make a difference to the people of Egypt – are all of concern today," Kerry said.

Leave a Reply to Jason Ganna