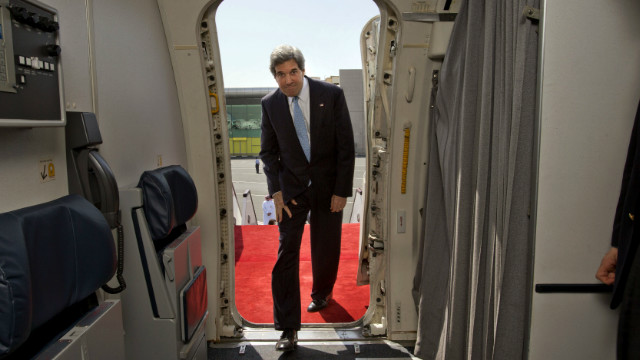 Secretary of State John Kerry will travel to Israel and Turkey this weekend to try to jumpstart the long-stalled Mideast peace process and build on the two nations' efforts to repair ties, U.S. and Turkish officials said Wednesday.

Kerry moved up his Monday departure for London and then South Korea, China and Japan in order to capitalize on the reconciliation President Barack Obama brokered between Turkey and Israel during his visit to the region last month, according to the officials, who spoke on anonymity because the trip had not been announced. He will also discuss the crisis in Syria.

Obama scored a diplomatic success during his visit to Israel last month when he persuaded Israeli Prime Minister Benjamin Netanyahu to apologize to Turkey for a 2010 commando raid that killed nine activists on a Turkish vessel in a Gaza-bound flotilla.

Kerry's visit to Israel, the third in as many weeks, is part of what officials expect will be a several-month period in which Kerry tries to move the two sides toward formal peace negotiations. He is expected to meet with Israeli Prime Minister Benjamin Netanyahu and Palestinian President

Mahmoud Abbas, seeking confidence-building measures from both sides to nudge the parties back to the table.

Officials said Kerry hopes to persuade Abbas to agree not to seek any further unilateral recognition at the United Nations, as well as offer security guarantees for the Jordan Valley, a section of the West Bank that stretches from the Israeli border with Jordan and remains under full Israeli control. Israel has long demanded security guarantees for the area, which includes Jewish settlements and Israeli military bases. In past years Israel has insisted on keeping a small force to ensure border security.

Part of Kerry's strategy, according to U.S. officials, is to leverage those gestures by Abbas into concessions from Netanyahu on the issue of settlements, which has remained one of the thorniest points of the conflict. Abbas has long demanded a complete freeze in Jewish settlement construction before returning to peace negotiations.

Officials are wary of references to the shuttle diplomacy of previous administrations that have failed to bring about a peace deal.

"We know the optics of this will raise expectations and we don't want to do that because it is going to be a slow grind," one U.S. official said. "Clearly Kerry is interested and wants to be involved in a way that Hillary (Clinton) was not. But you need to ask whether something is possible. Kerry thinks it is possible and is going to make a go of it. So we are going to balance this with the reality that these are tough issues and this is going to take a lot of time."