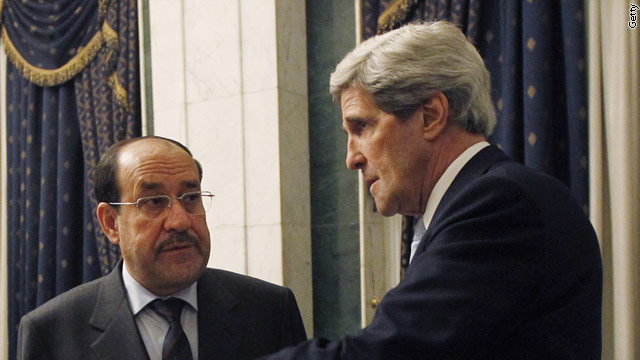 Kerry presses for end to Iran's shipments to Syria over Iraq

Secretary of State John Kerry said Sunday in Baghdad that he pressed Iraq's leaders to take steps prohibiting Iranian planes from delivering arms to Syria's besieged government, which is battling rebels backed by financial support from the American government.

Iranian planes must fly through Iraq's airspace in order to reach Syria with deliveries of weapons and supplies. The flights are occurring almost daily, according to a senior State Department official accompanying Kerry on his stop in Baghdad.

"Anything that supports President Assad is problematic," Kerry told reporters, referring to Syria's leader. "And I made it very clear to the prime minister that the overflights from Iran are, in fact, helping to sustain President Assad and his regime."

Kerry's previously unannounced trip to Iraq came after he joined President Barack Obama on a trip to Israel, the Palestinian territories and Jordan. This week marked the ten-year anniversary of the beginning of the U.S.-led war in Iraq, and the first time since 2009 that a U.S. secretary of state has visited the country. Obama last went to Iraq in April 2009.

Speaking to reporters in Baghdad, Kerry described his meeting with Iraqi Prime Minister Nuri al-Maliki as "spirited," and added that allowing the Iranian flights through Iraq belied the "common goals" shared by Iraq and the United States.

Last fall, Kerry's predecessor at the State Department, Hillary Clinton, called on Iraq to take steps to prevent Iran from using its land and airspace to deliver shipments to Syria. At the time, Iraq agreed to conduct random inspections of Iranian planes bound for Syria.

Iraq's foreign minister said at the time the country faced a difficult task in enforcing the inspections.

"We explained to the U.S. side that Iraq's air defense capabilities are limited, and we are in the stage of building our air force," Hoshyar Zebari said in a newspaper interview.

Iranian flights over Iraq to Syria began in March 2012 but were stopped shortly after, at the request of Iraq, Zebari said. The flights resumed in July.

The State Department official said al-Maliki would be offered a "theoretical seat at the table" in determining the political future of Syria if he agrees to halt the Iranian flights in Iraq's airspace.

Syrian rebels have been fighting to oust al-Assad for more than two years in a conflict that's claimed tens of thousands of lives and displaced more than a million people. Earlier this month, Western counterterrorism officials and analysts told CNN that Sunni jihadist groups were growing in strength along the Syria-Iraq border.

The groups could post a challenge to both the al-Assad government in Damascus and the Shiite-led government of Iraq.

Scores of people were killed and wounded earlier this week on the same day Iraq marked the ten-year anniversary of the U.S.-led invasion.

The attacks - 17 car bombs, seven roadside bombs, and two shootings - ripped mostly through Shiite neighborhoods of Baghdad, but also struck Sunni communities in other towns. At least 187 people were wounded.

The deteriorating security situation prompted authorities to postpone Provincial Council elections scheduled for April in the provinces of Anbar and Nineveh - a decision the State Department official said on Sunday was done without the input of Sunnis or Kurds.

Kerry pushed al-Maliki to reconsider his decision to delay those votes during their meeting Sunday.

"Everyone needs to vote simultaneously," Kerry said, adding: "No country knows more about voting under difficult circumstances better than Iraq."