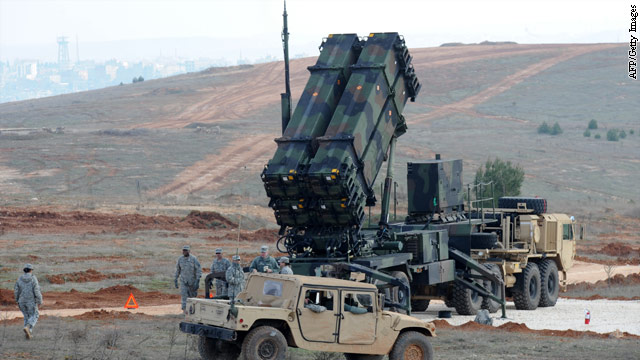 The mere possibility of U.S. involvement comes at a bad time for the military, which is preparing to ground some aircraft, scrap some naval deployments and cut back on training to meet budget cuts mandated by forced spending cuts that went into effect last month.

Depending on what the administration might decide to do - and no decisions have yet been made to do anything - military intervention also could meet with resistance from a public weary of war after the long conflicts in Iraq and Afghanistan.

Several NATO countries are working on contingency plans for military action in Syria, including imposing a no-fly zone, providing lethal military assistance to rebel groups and imposing an arms embargo on the Syrian government, Stavridis said. NATO hasn't discussed any such options as a whole, he said.

In Washington, military commanders continue to advocate strongly for a diplomatic solution rather than a military strike, a senior U.S. official said.

The top U.S. military officer said this week that Syria poses the most complex set of issues he could conceive.

"About six months ago we had a very opaque understanding of the opposition," said Gen. Martin Dempsey, chairman of the Joint Chiefs of Staff. "And now I would say it's even more opaque."

Dempsey has said he favored arming the rebels last year, when the Pentagon had discussions on the subject with the White House.

But Obama decided to limit U.S. assistance to nonlethal aid, and Dempsey now seems more averse to arming groups that may be influenced by extremist elements.

"I don't think at this point I can see a military option that would create an understandable outcome. And until I do, it would be my advice to proceed cautiously," he said.

Obama has not yet asked to see an action plan, senior military officials say.

Here's a look at some of the options under consideration by NATO officials and Washington:

NATO has installed Patriot missile batteries in Turkey, near its border with Syria, which could be aimed to shoot down Syrian aircraft, Stavridis said

But Turkey only allowed the missile batteries to be placed there for defensive purposes, and NATO nations would have to agree before they could be used for offensive strikes against Syria.

That's not something under immediate consideration, Stavridis said.

The U.S. military has enough airpower in the region to take action against Syria, according to officials. That includes fighter jets and bombers spread out across air bases in the Middle East and nearby aircraft carriers. The U.S. Navy also has warships equipped with Tomahawk missiles, which could be used to hit chemical weapons supplies.

But such strikes pose a danger of releasing chemical agents into the air around civilian populations in Syria, the officials said.

Other options include bombing runways to prevent Syrian aircraft from taking off, or disrupting communication between the regime leaders and ground commanders.

The United States has no plans to put "boots on the ground" in Syria. But the Pentagon is a planning machine, so the Defense Department last year came up with a military analysis of a ground option should the president request it.

According to the analysis, it would take up to 75,000 troops to secure Syria's chemical weapons facilities if they were in danger of being looted. An actual deployment would likely involve far fewer ground troops, and from various nations, but it underscores the scope of the challenge.

Before ground troops would go in, weeks of airstrikes would be needed to destroy Syria's air defenses.

The military believes Syria has about 50 weapon production sites around the country, as well as some storage areas and research centers.

Leave a Reply to Foghorn Leghorn