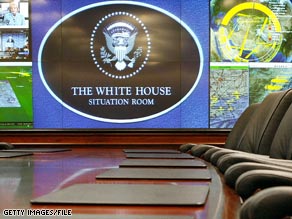 President Obama has invited a handful of CEOs to the White House Situation Room on Wednesday to discuss the growing threats posed by cyberattacks.

Administration officials are so far staying tight-lipped about who is attending the closed-door meeting, but one White House official tried to downplay the choice of convening it in the Situation Room, which is ordinarily reserved for high-ranking members of the president's national security team.

Instead, the White House official said, the Situation Room is the only conference room available Wednesday to accommodate the meeting.

The president is expected to discuss his administration's latest steps to beef up cybersecurity, including a recently signed executive order designed to improve intelligence sharing between the government and the private sector over potential cyber vulnerabilities, particularly those posed by Chinese hackers.

Among the CEOs invited are the leaders of AT&T, Honeywell and Northrop Grumman, the White House said Wednesday.

In an interview that aired Wednesday morning, Obama downplayed recent comments from Rep. Mike Rogers of Michigan, the Republican chairman of the House Intelligence Committee, who said the United States was in a cyber "war" with China.

"There's a big difference between them engaging in cyberespionage or cyberattacks and, obviously, a hot war. What is absolutely true is that we have seen a steady ramping up of cybersecurity threats. Some are state sponsored. Some are just sponsored by criminals," Obama said in the interview with ABC News.

"Industrial secrets are stolen. Our companies are put into competitive disadvantage. You know, there are disruptions to our systems that, you know, involve everything from our financial systems to some of our infrastructure," he added. "And this is why I've taken some very aggressive executive actions."

Testifying before Congress on Tuesday, Director of National Intelligence James Clapper said he believes cyberattacks pose more of a threat to the United States than a land-based attack by a terrorist group.

"Attacks, which might involve cyber and financial weapons, can be deniable and unattributable," he said. "Destruction can be invisible, latent and progressive."

Meanwhile, in a speech before the Asia Society on Monday, National Security Adviser Tom Donilon said cyberattacks are now the No. 1 U.S. issue with the Chinese government.

"Beijing should take serious steps to investigate and put a stop to these activities," he said, adding that "we need China to engage with us in a constructive, direct dialogue to establish acceptable norms of behavior in cyberspace."

Wednesday's meeting also comes a month after Attorney General Eric Holder unveiled a 150-page report on cybersecurity that included new pledges by the Justice Department and FBI to crack down on hacking. The report also shared how corporations vulnerable to attacks can strengthen their own security and included a proposal to better coordinate efforts with U.S. allies to prosecute foreign hackers.