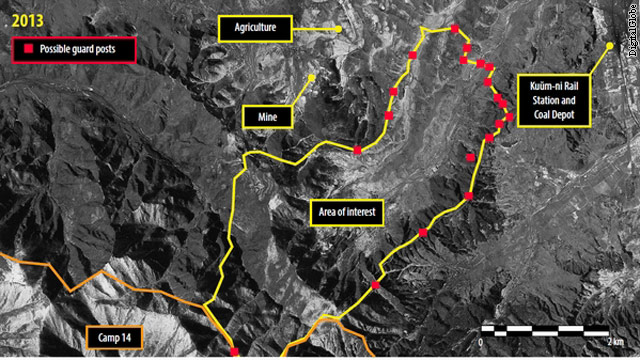 North Korea may be expanding one of its notorious prison camps to incorporate control of civilians in adjacent villages.

Amnesty International says new satellite imagery of the area surrounding a prison known as Camp 14 shows signs of a security perimeter and guard towers around mining operations that are not typically seen in other villages.

"What's most worrisome about this development is that it seems to expand the scope of control beyond the formal boundaries of the prison camp," said Frank Jannuzi, deputy executive director of Amnesty International USA, in a briefing with reporters.

"You are seeing evidence of new levels of intrusion and control and security around civilian populations in a country already characterized by severe restrictions on basic freedom of movement and communication."

The images, taken between 2006 and February of this year, show up to 20 probable guard towers and controlled points of entry to areas not immediately bordering the prison camp but in close proximity to areas undergoing an expansion in mining activities.

There was also a significant addition of buildings in the area that Amnesty International said might be used to house citizens brought into the area to serve as forced labor in the mines.

As many as 1,500 people may have been brought into the area to live in the new units, the group said.

North Korea watchers who have traveled to the secretive nation in the past say the level of government control varies from village to village.

But new guard towers and security gates surrounding villages near Camp 14 may indicate that no one gets in or out of the region without official permission, Amnesty International says.

With most of the world's focus centered on the bellicose rhetoric from the regime of North Korean leader Kim Jong Un, Amnesty International says it hopes the photos will spur the United Nations Human Rights Council to establish a commission of inquiry that could get on the ground and investigate current conditions.

And with additional sanctions from the U.N. Security Council this week directed at the North's recent ballistic missile and nuclear tests, Jannuzi said there should be additional focus on other likely drivers of change within North Korea.

"If there is to be change on the Korean peninsula, it's going to come through a change in the human condition, the mindset of the North Korean people in government, their exposure to the outside world and the world's attention to their suffering," he said.