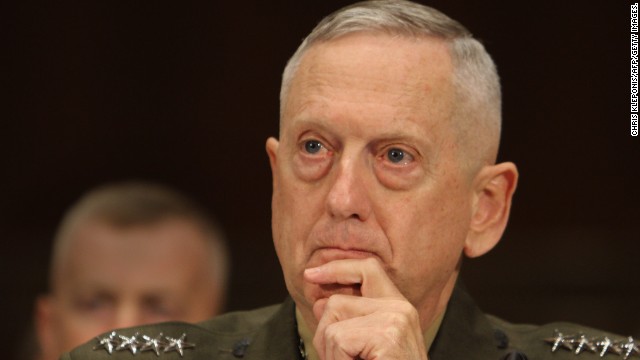 Mattis said Iran might be able to be swayed by "a purely cost-benefit ratio."

"Between economic sanctions, diplomatic isolation, and encouragement of behavior that does not cost them such a degree of political support that they end up losing power, there may yet be a way to bring them to their senses," Mattis said.

Asked by Graham if the only other option is bringing them "to their knees," Mattis responded, "yes, sir."

"The means, there are a number of means to do that, perhaps even short of open conflict. But certainly that's one of the options that I have to have prepared for the president," the Central Command chief said.

Secretary of State John Kerry told CNN's Jill Dougherty in an interview conducted in Doha, Qatar, that the United States was willing to sit down with Iran, but the country needs to prove it has only peaceful purposes for its nuclear program.

Over the weekend, Iran's ambassador to the United States told CNN's Fareed Zakaria that Iran was open to direct talks.

"I'm willing to do what the president instructs me to do, and the president calls that shot. But he has already made it crystal clear, going back several years, that the president is prepared to engage with Iran," Kerry said in his first interview with CNN since becoming secretary of state.

"He prefers a diplomatic solution to any kind of military option. And he has said that he is prepared to engage in bilateral conversation. So that option is open."

Iran's ambitions were also the focus of a meeting between Defense Secretary Chuck Hagel and Israeli Defense Minister Ehud Barak at the Pentagon on Tuesday.

Hagel said the United States believes the "window is closing" on diplomacy, according to a summary of the meeting provided by the Pentagon.