Sen. Marco Rubio, R-Florida, proposed the U.S. provide ammunition to the Syrian opposition Wednesday, warning that the rebels feel "abandoned" by the West.

"I think it behooves us to do everything we can to ensure that the strongest elements in Syria post-Assad are those that are listening to us, can be influenced by us and have a desire not just to keep the Syrian nation together but to respect the rights of the diverse country that Syria is," he said, told an audience at the Washington Institute for Near East Policy.

Rubio said that while there are "plenty of weapons in Syria, what the opposition really needs is access to ammunition. And I think one of the things we can consider, if we can identify a couple of responsible groups, or more responsible groups, that we feel have built capacity, ammunition is something we can provide, which is not weaponry, per se, but is essential to the weaponry."

"I think that's a step that I'm prepared to advocate for, the provision of ammunition to resistance groups within Syria that we think we can build a long-term dialogue with," added Rubio, a member of the Senate Foreign Relations Committee who just returned from the Middle East.

Rubio, who is frequently mentioned as a possible contender for Republican presidential nomination in 2016, said the Syrian opposition felt the West in general, "and the US in particular has abandoned them." END_OF_DOCUMENT_TOKEN_TO_BE_REPLACED 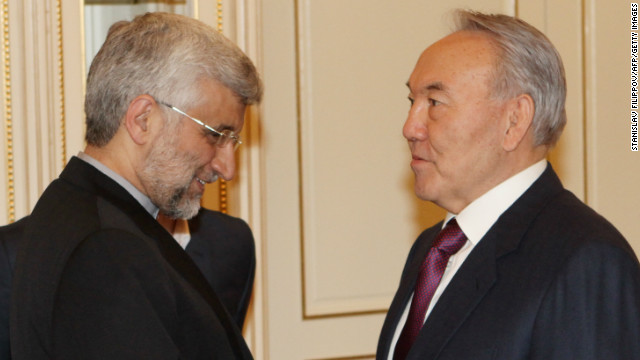 Diplomats emerged Wednesday from an unusually secretive round of talks over Iran's controversial nuclear program with a joint announcement to hold a follow-up meeting within weeks.

In a joint statement, the European Union's foreign policy chief, Catherine Ashton, and the chief Iranian negotiator, Saeed Jalili, announced that technical experts would meet in Istanbul, Turkey, on March 18.

Political directors would later reconvene in this snowbound Kazakhstani city on April 5.

Iranian negotiators and representatives of the P5 plus 1 nations - the permanent members of the U.N. Security Council and Germany - entered into the talks Tuesday in Almaty, Kazakhstan, before the backdrop of fresh international economic sanctions against Iran.

Their crippling effect has fueled resentment in Tehran.

The changes are under discussion with allies as well, as part Secretary of State John Kerry's meetings this week in Europe, a senior administration official said.

The sources said the United States is not considering providing weapons.

The administration is also moving toward giving humanitarian aid directly to the Syrian Opposition Coalition, the official said, adding that this was already happening in limited amounts.

The consideration was first reported on Tuesday by The Washington Post.

Expectations are low for a breakthrough with Iran in the latest round of nuclear negotiations in Kazakhstan, but relations between the Unites States and the Iranian people are proving much more promising.

U.S. wrestlers visited Tehran last week to compete in the World Cup, where they received a warm welcome by Iranian fans at the capital's Azadi Stadium.

And now, CNN has learned, eight Iranian museum specialists on Monday began a three-week visit to the United States as part of a State Department cultural exchange program.

The five-city tour includes stops in Washington, Philadelphia, Chicago, New York City, and Los Angeles, where the group will learn about best practices in securing and displaying art exhibits from curators and archeologists at some of the most popular American museums including the National Gallery, the Metropolitan Museum of Art and the Guggenheim Museum. They will also visit universities and meet with other art-related organizations.

The U.S. does not have government-to-government exchanges with Iran, so the visitors will not meet with any American officials.