The United States and Pakistan will begin working together on a new fertilizer formula that could be a significant technological step to limit the ability of terror groups to make improvised explosives and car bombs using the ingredient.

An agreement to try to make a product more inert was reached last week after Pakistani officials from Fatima Group, a major fertilizer manufacturer, met with Pentagon officials.

"Such a long-term solution would be a true scientific breakthrough," Lt. Gen. Michael Barbero, the head of the Pentagon's Joint Improved Explosive Device Defeat Organization, said in a statement.

Barbero met with Fatima representatives to urge them again to take steps to control fertilizer inventories. The meeting itself was a step forward since the Pakistani government previously had stopped the U.S. military from talking directly to the company.
END_OF_DOCUMENT_TOKEN_TO_BE_REPLACED 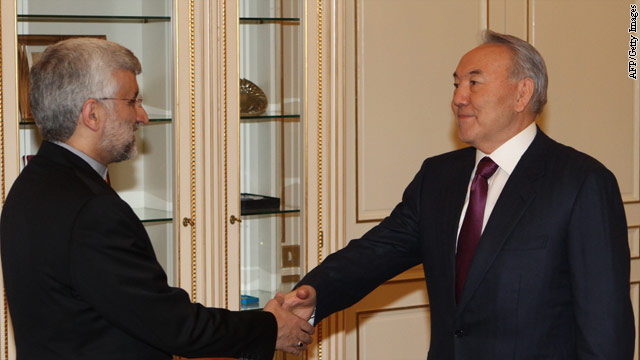 From 1949 through 1989, the Soviet Union conducted hundreds of nuclear tests and experiments, both underground and above ground, at Kazakhstan's Semipalatinsk test site.
END_OF_DOCUMENT_TOKEN_TO_BE_REPLACED

Secretary of State John Kerry hit back on Monday at the notion the United States is not doing enough to support the Syrian opposition.

"We are determined that the Syrian opposition is not going to be dangling in the wind wondering where the support is or if it is coming, and we are determined to change the calculation on the ground for President (Bashar al-Assad)," Kerrry said in London.

Kerry said the United States and its allies are pursuing a political resolution to the civil war that assures a broad cross section of Syrian society is represented in a new democratic government.
END_OF_DOCUMENT_TOKEN_TO_BE_REPLACED