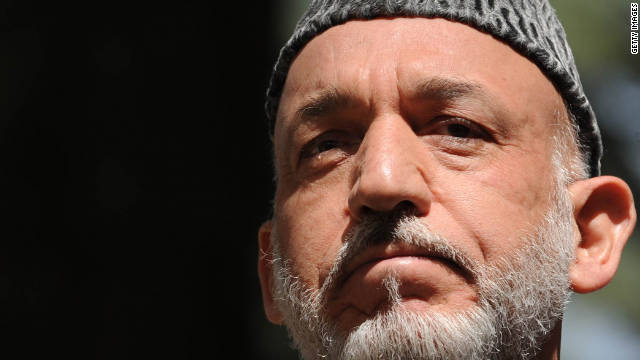 The planned and deliberate withdrawal of U.S. and International Security Assistance Force troops is in full swing. To his credit, Karzai has taken ownership of the conflict and pushed the international community toward doing less itself and more on increasing efforts to build Afghan capacity.

He has secured "strategic partnerships" with the NATO alliance and bilateral agreements with several nations - including India, Germany and Norway - to help Afghanistan over the long term.

But there is another Karzai: one who makes provocative and sometimes inaccurate statements that call into question the intentions and efforts of the international community. Karzai has unforgivingly attacked NATO over the issue of civilian casualties, and decried international economic and development aid as the sole cause of corruption in Afghanistan. He has claimed that it is the bureaucratic obstinacy of the coalition, and not any internal Afghan deficiencies, that have stunted progress in the fight against the insurgency. This is hardly the language of "cooperation and teamwork."

I witnessed this routine personally, time and time again, during my time as a senior official at ISAF headquarters. Karzai's attacks often follow a similar pattern: a hyperbolic statement, a clarification, and then a slight rollback on the initial position for the international media. Some have said that he is simply playing to his domestic base, particularly southern Pashtuns, who are concerned that Karzai only acts only at the bequest of the international community. This particular approach, whatever the calculus, harms the ability of the international community to maintain its already fragile parliamentary and public support for engagement in Afghanistan.

Karzai's most recent statement - that he will prohibit Afghan troops from calling in ISAF air support under "any circumstances" - reflects this problem. This move followed a joint Afghan-NATO operation, where Afghan forces called in air support that tragically resulted in the deaths of 10 Afghan civilians. Karzai, rather than seeking a "mature" discussion of the issues, acted reflexively and issued a decree barring Afghan forces from asking "for the foreigners' planes for carrying out operations on our homes and villages."

His unfair and irresponsible characterization that "foreigners" are the threat to the Afghan population, and that it is "foreigners" who wage war on Afghan homes, threatens to weaken the coalition that has helped build Afghanistan's capacity to secure its future.

Back in the coalition capitals, the perception is that not only is the international community not wanted, but that our troops, who fight side by side with Afghans, may be prohibited from taking actions to defend themselves. Karzai's statement comes a little over a month after his own chief of staff, Abdul Khurram, told international media that "the world needs us more than we need them."

This is a recipe for failure when populations are already on edge over stories of infiltrator attacks and the Afghan National Security Forces' inability to take over on its own. Nations have remained engaged in Afghanistan despite an ever increasing lack of support by their populations.

Statements like those from the Afghan palace could trigger an end to not just military aid but, in times of severe budget austerity, development assistance as well. In short, this is not the narrative Karzai wants. There are too many in the West who would be all too willing to call his bluff and leave him and the Afghan people on their own.

As difficult as the challenges with the international community may appear to be now, the tests of a reconciliation process will prove equally, if not more, daunting.

Afghanistan needs Karzai the statesman: the Karzai who can work with both the international community and the Afghan people, not just play one against the other. This is Karzai's charge for the final year of his presidency. Failure may mean putting peace much further out of reach of the Afghan people who have already suffered so much for so long.

Leave a Reply to delta 8 THC