By Chris Lawrence, with reporting from Barbara Starr

[Updated at 9:30 p.m. ET] The U.S. military is ending its policy of excluding women from combat and will open combat jobs and direct combat units to female troops, multiple officials told CNN on Wednesday.

Defense Secretary Leon Panetta will make the announcement Thursday and notify Congress of the planned change in policy, the officials said.

"We will eliminate the policy of 'no women in units that are tasked with direct combat,'" a senior defense official said.

The officials cautioned, however, that "not every position will open all at once on Thursday." Once the policy is changed, the Department of Defense will enter what is being called an "assessment phase," in which each branch of service will examine all its jobs and units not currently integrated and then produce a timetable for integrating them.

The Army and Marine Corps, especially, will be examining physical standards and gender-neutral accommodations within combat units. Every 90 days, the service chiefs will have to report on their progress.

The move will be one of the last significant policy decisions made by Panetta, who is expected to leave in mid-February. It is not clear where former Sen. Chuck Hagel, the nominated replacement, stands, but officials say he has been apprised of Panetta's coming announcement.

END_OF_DOCUMENT_TOKEN_TO_BE_REPLACED

Much of the focus of U.S. Secretary of State Hillary Clinton’s appearance on Capitol Hill Wednesday was on whether her department failed to appreciate and respond to the risks that led to the Benghazi attack - and whether it had the resources to confront such risks.

And, of course, on whether in the immediate aftermath, the administration characterized the attack candidly and accurately.

But the hearings also illustrated how the United States is scrambling to catch up with new realities in North Africa – and how it faces a long struggle in a new arena of instability.

Clinton acknowledged that “the Arab revolutions have scrambled power dynamics and shattered security forces across the region.”

Looking back to her confirmation as secretary of state four years ago, Clinton said, “I don’t think anybody thought [Egyptian President Hosni] Mubarak would be gone, [Libya’s Moammar] Gadhafi would be gone, [Tunisian leader Zine El Abidine] Ben Ali would be gone.”
END_OF_DOCUMENT_TOKEN_TO_BE_REPLACED 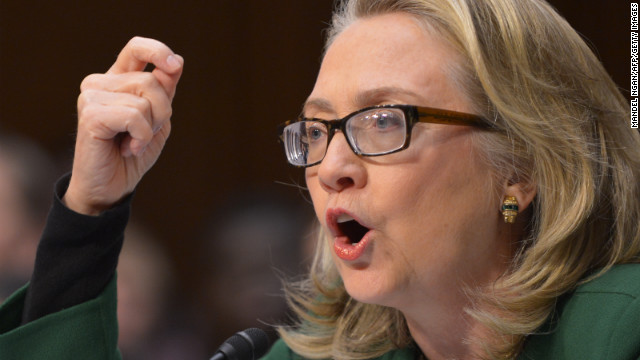 Clinton in the hot seat on Benghazi

Secretary of State Hillary Clinton is testifying today about the deadly terrorist attack in #Libya last year. Follow our coverage:

Watch the hearings on CNN.com

We are live blogging on CNN's 'This Just In' blog

The deputy leader of al Qaeda in the Arabian Peninsula and one of the most wanted men in Saudi Arabia has been killed, a prominent jihadist announced Tuesday, though officials in the group's home base of Yemen said they had no evidence of his death.

It was not clear how al-Azdi died. SITE said media reports indicated he died of injuries incurred in a December drone strike.