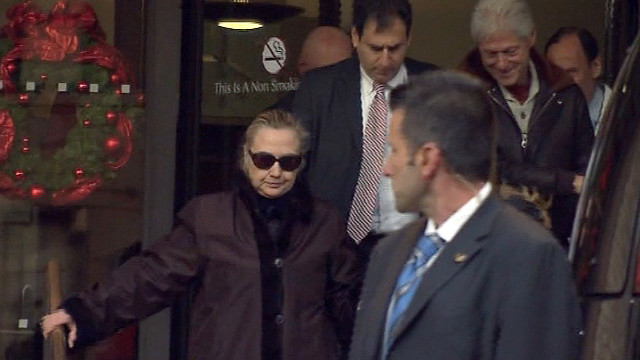 Hillary Clinton set to return to work at State Department

U.S. Secretary of State Hillary Clinton will return to work Monday for the first time since she was sidelined by illness, a concussion and a blood clot, according to a schedule released by the State Department.

According to the department's weekly schedule, Clinton is slated to attend a meeting with assistant secretaries of state at 9:15 a.m. ET Monday. On Tuesday she'll meet with outgoing Defense Secretary Leon Panetta and National Security Adviser Tom Donilon at the White House before attending meetings with ambassadors at the State Department. On Friday Clinton will participate in events surrounding Afghan President Hamid Karzai's visit to Washington.

The secretary was discharged from a New York hospital Wednesday, three days after she was admitted for the treatment of a blood clot in a vein between her skull and brain. Doctors found the clot during a medical test related to a concussion she suffered in December, which she sustained after fainting from dehydration caused by the flu. END_OF_DOCUMENT_TOKEN_TO_BE_REPLACED

Badly burned after his armored personnel carrier hit a land mine in Vietnam, Chuck Hagel sat in a medical evacuation helicopter thinking of the horrors he had experienced during combat.

"If I ever get out, if I ever can influence anything, I will do all I can to prevent war," he would later tell his biographer, Charlyne Berens.

It was a seminal moment for the young soldier turned Nebraska senator who sources now say will be nominated by President Barack Obama to become the next secretary of defense.

Should he be nominated to replace current Defense Secretary Leon Panetta, Hagel would bring to the Pentagon a distinct bias against armed conflict forged during the Vietnam War. END_OF_DOCUMENT_TOKEN_TO_BE_REPLACED

Two sources close to Hagel have also been told to expect the defense secretary announcement on Monday, and additional sources – a senior administration official and a source familiar with the nomination – said Obama spoke to Hagel Sunday by telephone.

The White House was calling senators' offices Sunday to inform them Hagel's nomination is imminent and to help build support for it, a source familiar with the nomination said. CNN reported Friday that the White House had told some senior members of Congress to expect the tapping of Hagel, and another source with knowledge of the nomination called it "locked down." END_OF_DOCUMENT_TOKEN_TO_BE_REPLACED