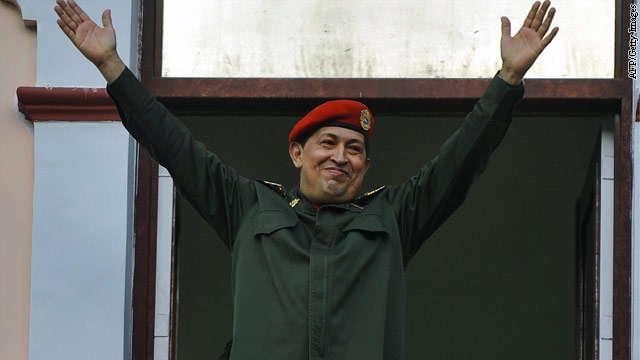 The National Institutes of Health says the outlook for respiratory failure “depends on the severity of its underlying cause, how quickly treatment begins” and overall health of the patient.

But Chavez’s illness has cast doubt on whether he will be able to be inaugurated next week for his fourth term.

For the United States, Chavez has been a diplomatic trouble-maker since he took office in 1999. He famously called President George W. Bush “the devil” at the U.N. General Assembly six years ago.

Relations with the leader of the oil-rich nation have improved during the Obama administration.

The State Department confirms it has been talking with Venezuelan government officials and with the opposition but described it as routine diplomatic activity.

"Obviously, we talk to Venezuelans from across the political spectrum, as we do with countries around the world,” State Department spokeswoman Victoria Nuland told reporters on Thursday.

“But any political transition that takes place in Venezuela has to be the product of decisions that are made by Venezuelans. There's no made-in-America solution here,” she said.

In 2002, the United States had close ties to the opposition and those involved with a coup that briefly removed Chavez from power. Although Washington denied being involved, many Venezuelans believe the United States was intent on overthrowing Chavez.

Michael Shifter, president of the Inter-American Dialogue and Adjunct Professor of Latin American Studies at Georgetown University's School of Foreign Service, said Venezuela has played a key role in regional affairs over the past 14 years.

“Hugo Chavez has been at the center of that. It’s a very polarized situation and so it has enormous consequences for all of Latin America and the Caribbean. The United States cannot afford to ignore Venezuela, it needs to pay close attention and to try and play a constructive role,” Shifter said.

Venezuela sits atop of the largest oil reserves in the world. According to the State Department nearly 10% of U.S. oil imports come from Venezuela.

Chavez’s illness has ignited debate within Venezuela over what the Constitution requires for a president to take the oath of office. Shifter told CNN that elections are supposed to take place within 30 days if Chavez cannot resume his duties.

Chavez, he said, remains popular among many Venezuelans and is the “legitimate president” of Venezuela.

“There is a sense that he cares about Venezuelans. Some of the previous presidents did not care very much about the poor and Chavez has connected with the poor. So there is enormous loyalty and attachment that many Venezuelans feel towards Chavez and that counts a lot in politics,” Shifter said.

Venezuelan Information Minister Ernesto Villegas said on Thursday there was "iron unity" among the Venezuelan government, the military and the country's people "concerning the leadership and political ideology of Comandante Hugo Chavez."

Leave a Reply to Tembisa