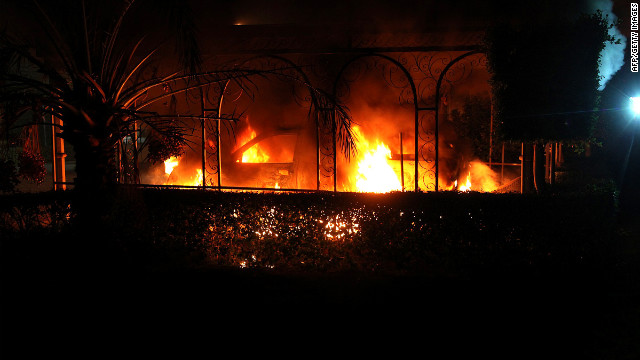 Update: Read CNN's coverage of the report which cites "systemic failures and leadership and management deficiencies" at the State Department. The full report can be found here. It includes recommendations for substantial improvements to how security is handled.

An independent review of the September 11 attack on the U.S. Consulate in Benghazi criticizes the State Department's Bureau of Diplomatic Security for its work in Libya before the event in which four Americans were killed, two sources who have read the report told CNN Tuesday.

The senior management in charge of diplomatic security "does not come out well at all," said one of the sources.

The review has been sent to Capitol Hill, and an unclassified version was expected to be released as well.

The Accountability Review Board completed its investigation into the matter this week and sent a copy to Secretary of State Hillary Clinton for review. A classified version of the report was delivered Tuesday afternoon to members and staff of the committees on Capitol Hill that have jurisdiction over the State Department.

Veteran diplomat Thomas Pickering and former Joint Chiefs of Staff Chairman Adm. Mike Mullen, both members of the review board will brief members of the House Foreign Affairs and Senate Foreign Relations Committees in a classified setting about the report on Wednesday.

State Department spokeswoman Victoria Nuland told reporters Tuesday that Clinton, who is home recovering from a stomach virus and concussion, wrote a letter to members of Congress that will accompany the report being sent to Capitol Hill.

Clinton ordered the review in the aftermath of the attack, which claimed the lives of Ambassador J. Christopher Stevens and three other Americans. Such reports are mandated by Congress when Americans working on behalf of the United States government are killed overseas.

It was expected to present a detailed examination of the events that led to the attacks along with a set of recommendations on improving security at U.S. diplomatic facilities around the world.

In a notice sent to all State Department employees Tuesday, the department explained how the report would be implemented once it was released.

Employees were told the implementation team met Tuesday and would continue to do so regularly to implement the recommendations of the board.

The politics surrounding the events that led to the report have claimed one political casualty, with U.S. Ambassador to the United Nations Susan

Rice last week pulling her name from consideration to succeed Clinton. Some Republican senators had said they would put a hold on her nomination if President Barack Obama had submitted it, based on comments Rice made in the days after the attack.

In place of Clinton, Deputy Secretaries of State William Burns and Thomas Nides will testify before the House and Senate committees Thursday.