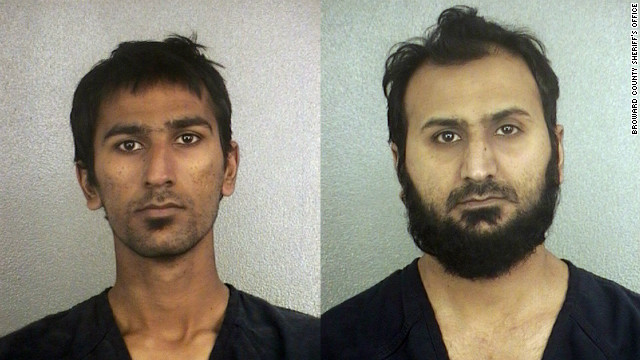 After the man's arrest in late November, investigators searched his home in Oakland Park, Florida, and found Christmas tree lights, wires, batteries, hydrogen peroxide, a disassembled remote-control car and other materials, according to the law enforcement official.

At a detention hearing Tuesday in Fort Lauderdale, Florida, prosecutors said that after Qazi was arrested he told law enforcement officers he had tried to contact al Qaeda. The prosecutors said he was motivated by the lectures of the late radical cleric Anwar al-Awlaki, who was killed by a drone strike in Yemen, and by Inspire magazine. The online magazine is produced by the terror group al Qaeda in the Arabian Peninsula and it has carried articles on how to make bombs.

The federal law enforcement source said there is no evidence Qazi ever actually contacted members of al Qaeda or related terror groups.

Prosecutors said Qazi traveled to New York on November 24 and spent nights sleeping at a mosque, a restaurant and on public transportation - apparently reflecting his financial situation - while he allegedly considered what site to attack.

On November 29, Qazi returned to Florida, where he and his brother and accused co-conspirator Sheheryar Alam Qazi, 30, were arrested. Qazi allegedly said he returned to Florida to continue to prepare and gather resources for an attack, according to prosecutors.

The two brothers were indicted on charges of plotting to use an explosive device and conspiracy to provide material support to terrorists.

Both have pleaded not guilty but face a maximum of life in prison if convicted.

According to the law enforcement official, Raees Qazi was the more active of the two in the plot and of greatest concern to investigators. At the detention hearing, prosecutors revealed that in their search of Raees Qazi's home they discovered an apparent goodbye letter to his brother.

"May God bless you or thank you for everything," prosecutors quoted the letter as saying. "I cannot pay you back for the help you have given me, but Allah can, God willing. (Don't panic, just keep it cool especially when someone asks)."

A federal judge ordered Raees Qazi detained pending trial. His brother remains in jail as well. No trial date has been set.

Raees Qazi's attorney did not immediately respond to CNN's request for comment.