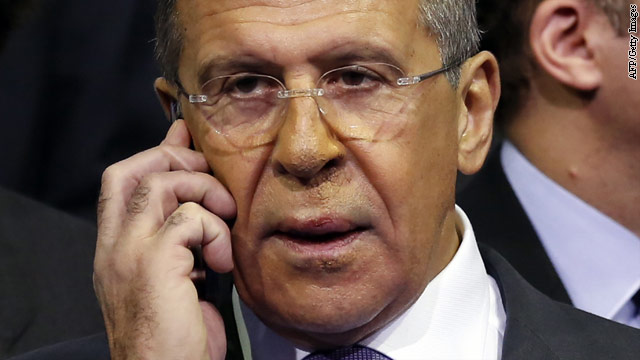 Announcing his decision in an interview Tuesday with ABC’s Barbara Walters, Obama said, "We've made a decision that the Syrian opposition coalition is now inclusive enough, is reflective and representative enough of the Syrian population” to recognize them. But the Russian foreign minister argues that U.S. recognition “contradicts the agreements in the Geneva communiqué, which presume beginning an all-Syrian dialogue among representatives named by the government, on the one hand, and the opposition, on the other.”

The Geneva agreement, worked out by Lavrov and U.S. Secretary of State Hillary Clinton in June, laid out a plan for negotiations between the opposition and the government that would, in turn, create a transitional governing authority, followed by elections. But Lavrov balked at a U.S. demand that Syrian President Bashar al-Assad step aside. In recent weeks, the special envoy to Syria from the United Nations and the Arab League, Lakhdar Brahimi, has revived the Geneva agreement, and he met again last week with Lavrov and Clinton to promote it as a possible solution.

The Russian foreign minister, however, points to the Syrian opposition’s “manifesto,” which, he said, states that its main objective is to “overturn the regime, dismantle government institutions and refuse dialogue with the Syrian government.”

“We inquired with our American partners as to how that conforms with the logic of the Geneva communiqué,” Lavrov said, “and they told us that the most important thing is to unite the opposition, and its platform can, quote, ‘be corrected.’ ”

“But,” he added, “to all appearances, they have decided not to correct it.”

Lavrov’s meeting with Clinton had revived hope that Russia might be open to exerting pressure on al-Assad to step aside, but Lavrov’s statements appear to dash that expectation - for now - with the foreign minister criticizing the U.S. decision to recognize the opposition as an “unexpected U-turn.”