In the middle of a foreign policy crisis, diplomacy isn't always best digested 140 characters at a time.

But the reaction so far to newly proposed State Department guidelines for staff members tweeting in their official capacity about certain subjects has been universally negative.

Under the proposed guidelines, obtained by the Diplopundit blog, there could be up to a two-day review ahead of publishing posts on social media sites.

Naturally, the issue turned into a heated debate on Twitter.
END_OF_DOCUMENT_TOKEN_TO_BE_REPLACED 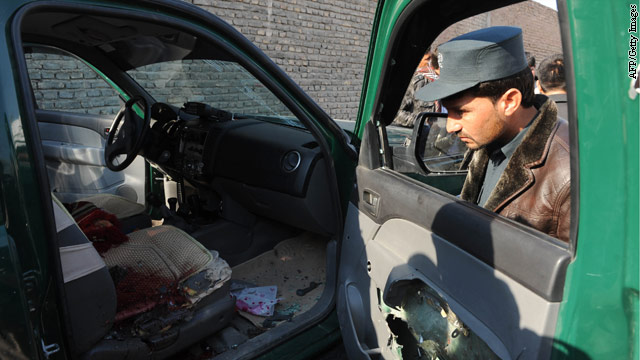 Insurgent attacks were up about 1 percent between April and September, which covers the annual fighting season, according to report.
END_OF_DOCUMENT_TOKEN_TO_BE_REPLACED

U.S. losing its sway as the sole superpower

The United States is likely to remain the leading world power in 2030 but won't hold the kind of sway it did in the past century, according to a new study by the U.S. intelligence community.

Washington will most likely hold its status as "first among equals" two decades from now, buoyed not only by military strength but by economic and diplomatic power. That's one of the conclusions of "Alternative Worlds," released Monday by the National Intelligence Council.

Rising powers such as China may be "ambivalent and even resentful" of American leadership, but they're more interested in holding positions of influence in organizations such as the United Nations and the International Monetary Fund than assuming that role, the report found.

"Nevertheless, with the rapid rise of other countries, the 'unipolar moment' is over, and "Pax Americana" - the era of American ascendancy in international politics that began in 1945 - is fast winding down," the report states.
END_OF_DOCUMENT_TOKEN_TO_BE_REPLACED

An elite U.S. special forces team rescued an American doctor who had been abducted in Afghanistan, but lost one of their own members in the mission, officials said.

A U.S. official said the man who was shot dead belonged to the Navy's Special Warfare Development Group, more commonly known as SEAL Team Six. The elite unit is the same one that took part in the raid that killed al Qaeda leader Osama bin Laden, but the official didn't know if the fallen service member was involved in that operation.

North Korea has extended the window for a controversial long-range rocket launch by one week after finding technical problems in an engine, state media reported Monday.

The planned launch has been widely condemned by other countries like the United States and South Korea, which say it's cover for testing ballistic missile technology. The North insists the launch is aimed at putting a scientific satellite in orbit.

When it announced its plans on December 1, the reclusive North Korean regime said it intended to carry out the launch between Monday and December 22. But on Saturday, the state-run Korean Central News Agency (KCNA) said the launch may be delayed.

In a new article Monday, KCNA reported that scientists and technicians had "found technical deficiency in the first-stage control engine module of the rocket," citing a spokesman for the Korean Committee of Space Technology.