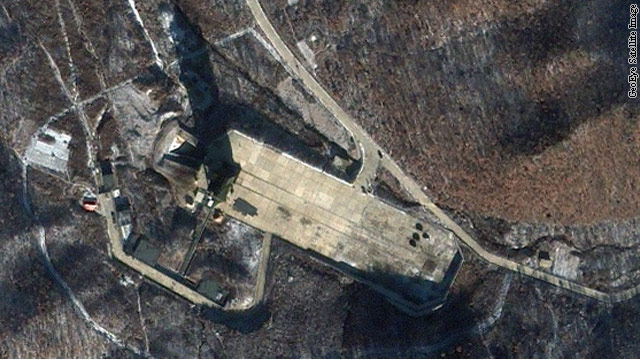 The December 4 image provided to CNN by satellite imagery company GeoEye shows increased activity by workers on the launch pad, an imagery analyst told Security Clearance. The launch pad activity was not evident in an image from DigitalGloe taken three days earlier.

"I don't believe that a launch is imminently imminent, but what we are seeing is sort of what they call the beginning of the end of launch preparations," said Allison Puccioni, an analyst with Jane's IHS who writes about North Korean imagery for Jane's Defense Weekly. "Prior to this, we had not seen much in the way of rocket launch pad activity, but now we are seeing some significant stuff happening," such as additional work on the rocket launch tower, she said.

North Korea says it intends to launch a rocket it claims is for science and research purposes sometime between December 10 and December 22. The United States has condemned the test because the launch employs the same technology that would be used in a test of ballistic missiles. The launch would also be a violation of two separate resolutions passed by the United Nations Security Council.

Puccioni, who analyzed images before North Korea's last launches last April and in 2009, tells Security Clearance the launch pad still lacks the massive numbers of vehicles and the amount of material that were present in photos in the 10 days preceding the last launches. Compared with images taken before those launches, it appears North Korea may still be as long as three weeks away from blastoff, Puccioni observed, with the rocket still apparently inside the assembly building near the launch site.

While that would fall outside of the North Korean timetable, it is still possible that North Korea could accelerate preparations and launch earlier.

"I like to say North Korea likes to say one thing and mean another, but they surprised me with their accuracy of their last launch window," Puccioni said. "I would not be surprised of it is within the window, especially" with the latest satellite image showing more preparation on the platform.

Glyn Davies, the U.S. special representative for North Korea, met with officials from South Korea and Japan in Washington on Tuesday. State Department deputy spokesman Mark Toner told reporters Tuesday the meeting was called after the North announced its plans to launch a rocket.

"These are part of our regular trilateral meetings (in which we) discuss a wide range of regional and global issues, but certainly the focus here will be on North Korea," Toner said.