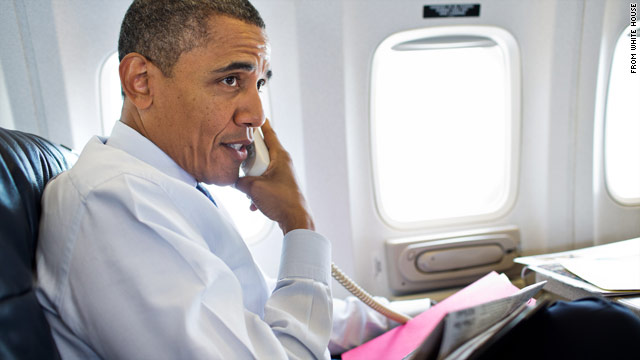 For the Obama administration, the watchword is "de-escalate." Stop the fighting, especially rocket attacks by Hamas on Israel, then deal with longer-term issues.

But President Barack Obama, who continues to support Israel's right to defend itself while urging that the fighting cease, cannot do it on his own.

From Southeast Asia, where he is his first international trip since his re-election, Obama has talked several times by telephone with two of the central players: Israeli Prime Minister Benjamin Netanyahu and Egyptian President Mohamed Morsy.

Secretary of State Hillary Clinton, traveling with him, has been even busier. She's been talking by phone with Israeli, Egyptian, Turkish, Qatari, and French officials, as well as with United Nations Secretary-General Ban Ki Moon, and then briefing the president on those conversations.

Clinton, along with Obama's national security adviser, Tom Donilon, also has been speaking with the U.S. ambassadors in Israel and Egypt, at one point making conference calls from the plane as his party flew into Myanmar.

The objective of the phone blitz, according to Ben Rhodes, the president's deputy national security adviser for strategic communications, is to pressure anyone with influence on either side to use it.

"Our position continues to be that those nations in the region, particularly nations that have influence over Hamas - and that's principally Egypt and Turkey, also Qatar - need to use that influence to de-escalate the conflict. And de-escalation has to begin with, again, an end to rocket fire from Gaza," says Rhodes.

Egypt, which has a peace treaty with Israel, is key. President Obama has spoken with President Morsy three times; Secretary Clinton also has had three conversations so far with Egyptian officials.

"What the U.S. is doing now is working with the Egyptians, working with the Israelis and trying to coordinate with both sides what the terms of a cease-fire would look like," says Middle East expert Haim Malka of the Center for Strategic and International Studies.

Egypt, he says, "has brokered cease-fires between Hamas and Israel in the past and it will be the key to brokering the current cease-fire agreement between Israel and Hamas to end this round of fighting. Egypt doesn't want chaos on its borders."

Chaos, he says, would only worsen Egypt's foundering economy and, to shore up its economic situation, it needs help from the international community, from the European Union, and from the United States which gives it $450 million annually in aid.

But for Morsy's new government, it's a difficult balance. He is a member of the Muslim Brotherhood and many Egyptians have sympathy for Hamas and the Palestinian cause.

"We are subcontracting to the Egyptians," says Aaron David Miller of the Woodrow Wilson International Center for Scholars. Miller sees a link between the fighting in Gaza and the bid by Palestinian Authority President Mahmoud Abbas for nonmember observer state status from the U.N. General Assembly

"I think a conscious, willful decision was made on the part of the president (Obama) that if he ever wants to manage Netanyahu on Iran and the peace process, he has to - on this issue and the one that is coming next week, the introduction of Abbas' initiative for state status - he is going to have to come out as hard-line as any president has in supporting Israel, both against Hamas and the rockets on the one hand, and against Abbas' initiative in New York."

It's a bid to "buy time," Miller says, for Turkey and Egypt to work their diplomacy. But, for now, as Obama continues Asian journey, Mideast diplomacy is overshadowing his trip.