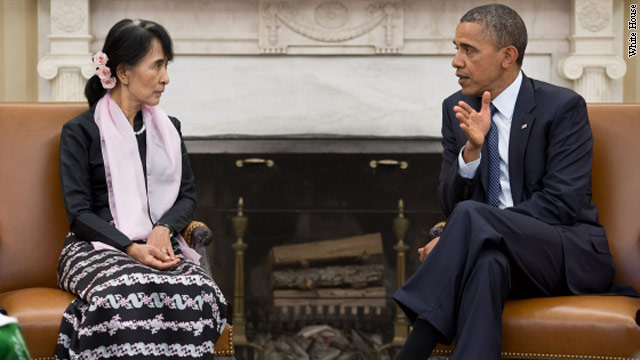 The United States on Friday announced the easing of restrictions on imports of most goods from Myanmar, just a day before President Obama leaves on a trip that includes a stop in the former pariah state.

The lifting of the ban, which had been in place for nearly a decade, was made in response to ongoing reforms taken by the government of the country also known as Burma.

"Today's joint actions by the Departments of State and Treasury are intended to support the Burmese government's ongoing reform efforts and to encourage further change, as well as to offer new opportunities for Burmese and American businesses," the departments said in a statement.

The United States already has eased restrictions on U.S. investment in Myanmar, and resumed normal diplomatic relations with the Southeast Asia nation.

While the United States will issue a waiver and general license to allow the import of most Burmese-made goods, restrictions on the import of jadeite and rubies mined or extracted from Myanmar will remain in place. The government-controlled industries have been linked to human rights abuses of the Burmese people in the past.

Under the leadership of President Thein Sein, Myanmar has undergone a series of political and economic reforms during the last year and worked to shed the image of a repressive military police state. It has also freed a number of political prisoners, including Nobel laureate Aung San Suu Kyi, now a member of the country's parliament.

In addition, the government has eased various censorship laws against the press, allowed for the formation of labor unions and begun a process of reconciliation with various ethnic groups across the country. Those aspects were also cited as reasons for the gradual easing of pressure by the United States on Friday.

But the rapprochement between the two countries is still proceeding on a cautious path.

Still, Obama's visit to Myanmar, an unthinkable prospect two years ago, and the first of a sitting U.S. president, is a recognition of the path the country has recently taken, and follows on a landmark visit last December by Secretary of State Hillary Clinton.

Obama is "going at a pivotal moment in Burmese history to embrace the progress that's been made and to encourage the government and the people of Burma to move forward on their transition to democracy," Ben Rhodes, deputy national security adviser for strategic communications, told reporters on a conference call Thursday.

Burmese exile leaders and human rights advocates have expressed concern that Obama's visit is coming too soon in the country's opening, and may not yield the additional reforms that a presidential visit can deliver if taken at the right time.

"This will be an historic visit," National Security Adviser Tom Donilon said in remarks at the Center for Strategic and International Studies on Thursday. "It will be the president speaking to the people of Burma in a clear and full way about the way forward, about the support the United States has for the reform movement, about where Burma can go if it stays on the path to reform, and that can't help but support and enhance the movement toward reform."

Obama, who will meet with both Aung San Suu Kyi and Thein Sein during his short visit to Myanmar, will also make stops in Thailand and Cambodia on the trip that formally kicks off Sunday.