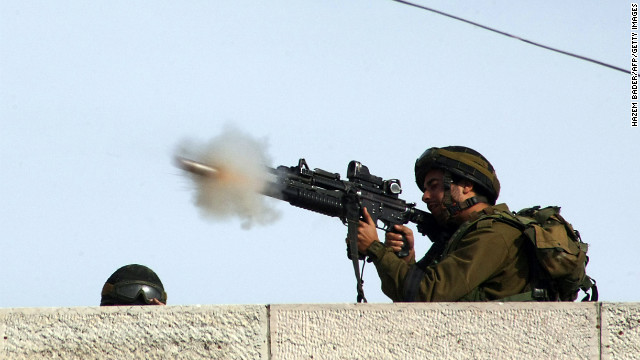 By Barbara Starr and Jill Dougherty

The major concern of the United States in the current Israeli-Hamas conflict is a potential Israeli ground incursion into Gaza, U.S. officials said Friday.

That would be a disastrous escalation that could trigger a larger conflict, a senior U.S. official told CNN.

"Escalation is what we are concerned about. We don't want it to escalate to the point where Israel feels it has to take additional action, specifically ground force action," the official said.

Israel has some ground forces on the border and ready to act if they are called to do so, said Israel's ambassador to the United States, Michael Oren, in a conference call with reporters Friday.

Israel's Cabinet on Friday authorized the call-ups of up to 75,000 reservists, prime minister's spokesman Mark Regev said. Israel's military said earlier in the day that 30,000 troops are being mobilized for a possible move into Gaza.

So far, Israeli tank units and troops have stayed outside Gaza. But the senior U.S. official indicated while the United States unequivocally supports Israel's right to self-defense, the U.S. message right now is for Israel not to enter Gaza on the ground.

"Ground forces would clearly be a major escalation," he said.

The official said the worry is Israeli ground troops could lead to drawing Egypt into the conflict.

"What action would Egypt take, would they move into Sinai?" he said.

He said the assessment is that a number of other Arab nations in the region would then, at least rhetorically, join with Egypt against Israel. The official emphasized this is a U.S. worry and the strong hope is Hamas will stop its rocket attacks on Israel, thereby ending Israeli strikes.

"The question also is how much Hamas wants to risk," the official said.

A second official said the United States also is watching closely to see if Iran, which backs Hamas, attempts to infiltrate new fighters or weapons supplies into Gaza. Neither official would speak on the record because they were discussing sensitive national security matters.

Daniel Ben Simon, an Israeli Knesset member not aligned with Prime Minister Benjamin Netanyahu's coalition, said Friday that he sensed "almost an absence" from Washington, adding, "It's time for the Americans to step in."

"We need the boss, and the boss is still the White House," Ben Simon said, calling U.S. officials "the only ones that can control the situation and ... talk freely" to all sides. "It seems the White House is too silent."

U.S. President Barack Obama did talk Friday with Netanyahu, after the Israeli prime minister called him to voice "deep appreciation ... for the United States' investment in the Iron Dome rocket and mortar defense system," the White House said.

"The president reiterated U.S. support for Israel's right to defend itself, and expressed regret over the loss of Israeli and Palestinian civilian lives," the statement said. "The two leaders discussed options for de-escalating the situation."

Obama called Egyptian President Mohammed Morsy, commending "Egypt's efforts to de-escalate the situation and (expressing) his hope that these efforts would be successful," the White House said in another statement. The president also "expressed regret for the loss of Israeli and Palestinian civilian lives."

The State Department says Secretary of State Hillary Clinton has made a number of phone calls trying to muster international pressure to stop what it terms a "very, very dangerous situation" in Gaza.

There will be other calls, Nuland said, to other countries to maximize pressure on Hamas. "I think we are all in the same place. The Egyptians are, the Turkish government is," she said.

Nuland added that the United States is encouraged that Egypt is involved in what she termed "urgent diplomacy."

The Egyptian prime minister was in Gaza on Friday, and Nuland said the call was an opportunity to get an update on that visit and to get a sense from the Egyptians in the wake of the visit what further steps they can take to help de-escalate the situation.

The U.S. Navy is continuing to keep to the standard deployment of three warships in the eastern Mediterranean that can shoot down ballistic missiles fired by Iran that would threaten Israel. Those ships are not equipped to deal with the short-range rockets being used by Hamas.

The Navy also has quietly made the decision to keep three amphibious warships with several hundred Marines on board in the vicinity of the Mediterranean in the unlikely event they might be needed to assist Americans leaving Israel.

"No one has even drawn an evacuation plan on the back of a cocktail napkin yet," one official said. But the three ships have been told to stay in place until there is more certainty about what is happening.

The U.S. Embassy in Tel Aviv took precautionary measures Friday, reducing its staff and suspending routine consular services, according to an embassy security message. Additionally, embassy staff were instructed to keep their children home from school for the day and were prohibited from traveling to the south of Israel.