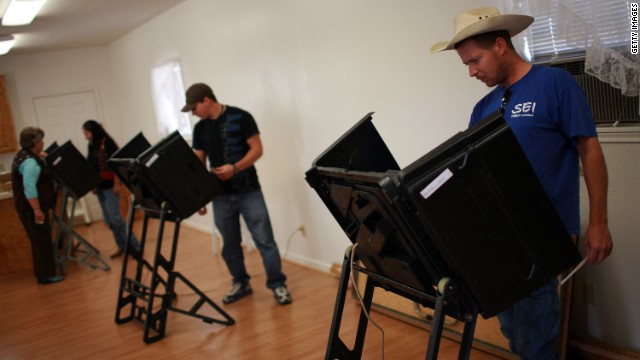 For the past decade, international election observers have traveled to the United States to witness how Americans conduct their presidential election.

They are back again this year but officials in the battleground state of Iowa and in Texas have warned that the observers could face criminal charges if they try to show up at polling stations on Tuesday.

Observers, however, told CNN it's a tempest in a teapot - they're not going to break the law.

"They won't be attempting to go to a polling station and have access where the state laws or the local laws prohibit it. They won't even try," said R. Spencer Oliver, Secretary General of the Parliamentary Assembly of the Organization for Security and Co-operation in Europe.

Asked about the threats from the two states, State Department spokeswoman Victoria Nuland said on Friday the observer team has a duty to comply with the law.

"They know that. We have reminded them of that. Our understanding from them is that they fully plan to comply with all U.S. laws," Nuland said.

The State Department, Nuland said, has been working with the international observers to put them in direct contact with state authorities "so that they can work out what terms would be acceptable" for observing the elections.

The international group, she noted, has observed elections in the United States since 2002, including "successfully" in Texas in 2008.

The parliamentary assembly has more than 100 observers from more than 30 countries in the United States. Observers have been working in 40 states, meeting with election officials, election boards and commissions.

The United States is a member of the organization, along with 56 other nations from Europe, Central Asia and North America.

While not part of the United Nations, the OSCE is the world's largest regional security organization. It deals with a wide range of issues, including arms control, human rights, democratization, counter-terrorism and economic and environmental activities.

It produces reports on elections that it observes, highlighting how a country adheres to general democratic standards. Those reports have no legal standing.

The OSCE's Spencer Oliver told CNN that participating states invite each other to observe their elections "in order to increase transparency."

The mission started after the end of the Soviet Union as an effort to ensure there were free and fair elections in the former Communist countries.

In countries like Russia, Belarus, Azerbaijan, Kazakhstan and other nations in transition, the OSCE has often criticized the elections. And Oliver says "because of their allegation that we're discriminating against these countries - that it's not balanced - we feel that in order to show good faith we should have an election observation in the United States."

The U.S. election, said Oliver, who is an American, is "very complex" compared to many countries, with election laws defined by each of the 50 states.

"It's a very complicated system and we try to explain that system to the observers," he said. The OSCE thoroughly briefs observers before they begin their mission.

Having an election system open and transparent to the world, he said, is a plus. Shutting the doors to observers could give dictators in authoritarian regimes an excuse to do the same thing.

Nuland said that "I think you know how much we, as a country, value OSCE observation."

"We deploy American observers to places like Russia, Ukraine, countries across the Euro-Atlantic area, to observe elections ourselves. We think we have an excellent system to display to the world so we look forward to hosting the OSCE here this time."