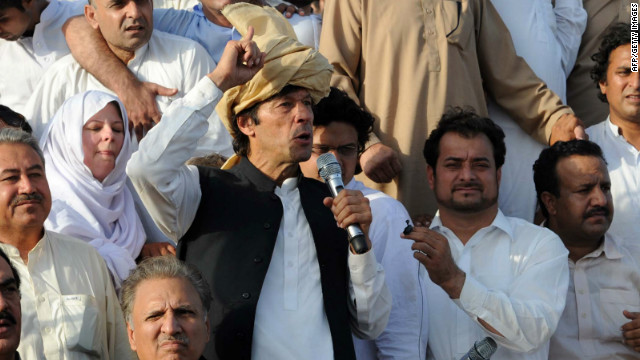 A Pakistani politician critical of U.S. drone strikes said Saturday that American authorities detained and questioned him at a Canadian airport.

Imran Khan, a former cricket star, this month led a march to the border of Pakistan's tribal region to protest drone strikes, which he says end up killing more civilians than militants.

Khan said he boarded a New York-bound plane in Toronto on Friday when two U.S. immigration officials asked him to step outside. The officials made him wait for about 40 minutes before interviewing him for another 20 minutes, he said.

"I kept asking them what was this all about, and then one guy interviewed me and he was so confused, he had no idea what he was saying," Khan told CNN by phone from Seattle, another stop on his trip.

"He was talking about some fund-raising, so I asked him to come to the point, and he said, 'We're worried you might use violence against drones.' I mean, it was so ridiculous, I didn't even know how to answer it."