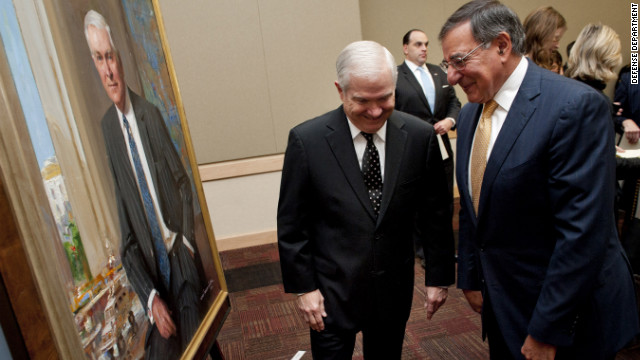 Former Defense Secretary Robert Gates evoked laughter during the unveiling of his official portrait Monday, but said his time heading up the military was the most important job in a long career in Washington.

“As America's Secretary of Defense during two wars was the singular honor and highest calling of my professional life,” Gates said at the Pentagon

Sending troops to war weighed on him every day, he said, so much so that he worried his devotion to protect them was clouding his judgment.

“Towards the end of my time in office, I could barely speak to the troops or about them without becoming over, without being overcome with emotion,” Gates said.

These feelings he says played a role in his decision to retire.

Gates began his role as Defense Secretary in 2006 under President George W. Bush. When President Barack Obama was elected in 2008 Gates stayed on in his role, despite plans of retiring—something he jokingly said he had current Defense Secretary Leon Panetta to thank for.

“Right after the 2008 election, Leon Panetta wrote an op-ed suggesting President Elect Obama retain me as Secretary of Defense,” Gates said. “So, when President Obama asked who might succeed me, I returned the favor to Leon. An act of selfless generosity on my part, for which I'm sure he thanks me every single day.”

Panetta introduced Gates at the unveiling with stories about the time the two have spent together and singled out work they did in Iraq in 2006.

“Every meeting we held, we drank tea after tea after tea after tea, and finally Bob and I looked at each other, and he hustled me off to the CIA headquarters and bar. And we finally had a decent drink,” Panetta said. “That's when I knew that Bob was really my kind of guy.”

Paying tribute to Gates, Panetta spoke about the difficulties the former Defense Secretary encountered with getting the troops equipment they needed- like MRAPS, an armored vehicle which helps protect troops from IED explosions.

Panetta also credited Gates with speeding up medical evacuation times in Afghanistan, cutting response times from one hour and 40 minutes to 41 minutes.

Mega-storm Hurricane Sandy did not deter those from attending the event.

“It's not every day you have to brave a hurricane in order to come to a portrait unveiling,” Panetta said. “But then again, for those of us who've been in this job, it's like dealing with a hurricane every day, so we're used to it.”